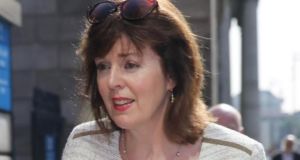 A High Court jury has failed to reach a verdict in a defamation action brought over an article by Sunday Times columnist Brenda Power.

The jury was discharged today after deliberations lasting almost eight hours resulted in no agreement. The case will be relisted for another hearing before a new High Court jury unless a settlement is reached in the meantime.

John McCauley(46), a property consultant originally from Donegal but now based in Dubai and Lithuania, had sued over a article in which Ms Power criticised him for taking a midwife to court over the interruption of him filming the birth of his first child.

After a second day of deliberations, the jury said it was unable to reach a unanimous or majority verdict in relation to one of two questions they were asked.  It had reached a verdict on a question of whether the words used in the article were true or false insofar as they allege facts.

The jury was unable to reach either a unanimous or majority verdict in relation to a second question over whether the words constituted honest comment on a matter of public interest.

The foreman told Mr Justice Eamon de Valera the jury felt that they would not reach a majority decision.

Mr Justice de Valera said in those circumstances he would discharge the jury which comprised  seven women and four men as one juror was excused last Friday due to a holiday commitment.  The judge, who said it was the longest time a jury had been out in his experience, thanked them and excused them from jury service for ten years.

The case, which lasted five days, centred on a March 2009 article written following publicity surrounding another case brought by Mr McCauley against midwife Irish Halbach and Mount Carmel Hospital in Dublin.  He claimed Ms Halbach had acted unreasonably by stopping him filming just after his daughter Simone’s birth by C-section in 2006. That case was dismissed in the Circuit Court.

He claimed Ms Power’s subsequent column about that case portrayed him as having no consideration or care for his partner or his baby. The column, he alleged, showed him as “some kind of head case running around with a camera”.

He claimed it meant he failed to reassure or comfort his partner, Lithuanian teacher Jurgita Jachimaviciute  in what he says was wrongly  stated by the journalist to be an emergency situation.

Ms Power and the Sunday Times, who were both sued, denied the claims and said the article was  true and was fair comment. Ms Power said she stood over the article which she said was written on the facts of  the court case taken against the midwife.

She described as appalling and unforgivable the fact he sued the midwife.   Instead of  sending her an apology for his behaviour on the night of the birth, as well as flowers and a card, he sent her a solicitor’s letter, she said.