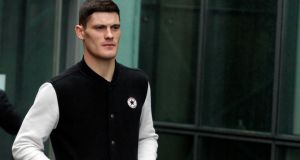 Dublin football star Diarmuid Connolly has been spared a possible jail sentence and a criminal conviction for an unprovoked attack on a man in a pub two years ago. Photograph: Collins Courts

Dublin football star Diarmuid Connolly has been spared a possible jail sentence and a criminal conviction for an unprovoked attack on a man in a pub two years ago.

All-Ireland winner, Connolly (26), had pleaded guilty earlier to assault causing harm to Anthony Kelly, who suffered a fractured eye-socket, at a pub in Phibsboro, in Dublin, in the early hours of August 6th, 2012.

Judge Patrick Clyne today said he was dismissing the case because Connolly had done all that had been asked of him through a series of restorative justice measures. The judge noted the unreserved apology, which was accepted by Mr Kelly during a hearing last year at Dublin District Court.

Connolly, who has recently earned his first All Star award, had also paid €5,000 in compensation to the victim, who in turn donated the money to the court poor box, the judge said.

This sum was considerably greater than the maximum fine the district court could impose, the judge said in explaining his reasons for dismissing the case.

The St Vincent’s forward had also already complied with a court order to complete an anger-management course, the judge said as the the case was finalised at Blanchardstown District Court today.

In May, Judge Clyne, who had described the attack as unprovoked, had asked Connolly to do “80 hours voluntary service at GAA, dealing with children, over the summer months, teaching them, coaching them”.

The judge heard that Connolly, who has no previous convictions, had completed 82 hours.

Connolly, who is ranked among the top players in the country, had been in the St Vincent’s team which won the Dublin SFC final on Monday evening.

He stood silently as the judge set out the reasons for dismissing the case.

In an outline of the prosecution’s evidence given earlier, the court had been told that the attack happened at 3.40am in McGowan’s pub.

Connolly, who has an address at Collins Park, Beaumont, north Dublin, “punched him in the face”. Mr Kelly, who is in his 30s, was knocked down and Connolly then “continued to punch him on the ground”.

Mr Kelly suffered a fractured eye socket during the attack, but he has recovered, the district court has heard.

Earlier, the All-Ireland winning forward’s lawyer had told the court that Connolly “apologises unreservedly to Mr Kelly”. Connolly had also shaken hands with the victim who had accepted his apology at an earlier stage in the case.

The attack happened less than two days after Dublin defeated Laois in a quarter-final of the 2012 All Ireland Senior Football Championship.