Woman struck by iron bars from trailer while out walking sues 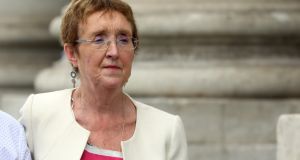 Frances O Driscoll told the High Court that after the accident she missed ‘walking, dancing and swimming’. Photograph: Collins Courts

A woman who suffered catastrophic injuries when she was struck by iron bars protruding from a passing trailer while out for a morning walk has sued at the High Court.

Frances O Driscoll, who had been an active, energetic lady, has been left with irreversible brain damage and will never work again, Dr John O’Mahony SC said.

He told Mr Justice Michael Hanna that Mrs O’Driscoll was walking at Causeway, Rosscarbery, west Cork, when metal bars on a passing trailer became loose and hit her on the legs, knocking her on her face to the ground.

She has also sued the Motor Insurers Bureau of Ireland as Mr Herlihy did not have a valid insurance policy at the time of the accident in 2016.

It is claimed there was failure to secure the iron bars adequately or at all and the bars were negligently, improperly and carelessly transported.

Mr Justice Hanna was told liability was admitted and the case was for assessment of damages only.

A jury at Cork Circuit Criminal Court had acquitted Mr Herlihy last year on a charge of dangerous driving causing serious bodily harm to Ms O’Driscoll on April 16th, 2016, at Causeway, Rosscarbery. He was found guilty of failing to take adequate precautions to prevent a load falling from a vehicle and fined €500 for that offence.

Opening the High Court case on Wednesday, Dr O’Mahony said there were 12 iron bars, 20 feet long, in the trailer and they were protruding about four feet from the rear.

The bars became loose and protruded from the side of the trailer and Ms O’Driscoll was struck in the lower limbs and fell face down on the pathway, he said.

She suffered appalling injuries and is left with permanent sequelae from which she will never recover, he said.

She suffered multiple fractures to her legs and face, has lost complete vision in her left eye and was in hospital for five months afterwards.

Ms O’Driscoll had enjoyed life with “great gusto”, was an active woman who loved swimming and walking and her life pattern has been catastrophically and negatively impacted. “She was the innocent victim of this tragic accident.”

Garda Joan O’Sullivan, of Clonakilty Garda station, said she saw paramedics treating Ms O’Driscoll at the scene and there was a lot of blood.

Michael Herlihy told her he was bringing the steel bars home where he was laying a foundation for a wall, she said.

There were twelve steel bars and one ratchet strap securing them. There were other ratchet straps which could have been used and she thought the strapping was not adequate and “was dangerous”, the garda said.

In evidence, Ms O’Driscoll said she is “not the same Frances”. “They say I was nearly left for dead, they should have let me die, I wouldn’t have to cope.”

She broke down in tears during her evidence.

“I don’t remember the accident. I was going back from my morning walk and it happened to me unfortunately.The first thing I remember is being in hospital and they were putting needles in me.”

“I just can’t cope with it. It is enough coming to Dublin to doctors but having to come to court with this.”

She said if she does anything at home, she gets extremely tired and has to lie down. She was still in hospital when her daughter got married in June 2016 and had to attend in a wheelchair.

“It was all so upsetting, I could not enjoy it. The nurses had to come with me.”

She used to love her job as a pharmacy assistant for the last 41 years and loved to walk, swim and dance, she said.

“I miss it all, I miss it terribly. I am missing so much in my personal life, walking, dancing and swimming. I loved it.”