Widow of man who died after attending GP with chest pain gets €800,000 settlement 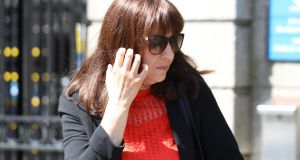 Allison Ryan, of Bantry Road, Drumcondra, Dublin, pictured leaving the Four Courts after she settled her High Court action over the death of her husband. Photograph: Collins Courts

The widow of a 42-year old father of three who died of a heart attack three weeks after presenting to his GP with pain in his chest and arms has secured a €800,000 settlement of her High Court action over his death.

Allison Ryan’s counsel Bruce Antoniotti SC said their case alleged the wrong diagnosis was made when Gerry Ryan visited his GP on March 4th 2014 and Mr Ryan should have been referred to a cardiologist.

Counsel said a full defence on every aspect of the case had been put forward.

He said Mr Ryan, a senior car salesman, was a heavy smoker who was pre diabetic and there was a a history of heart disease on his father’s side.

He said Mrs Ryan rang the medical centre around March 28th 2014 to say her husband’s condition was not improving and he was given an appointment for March 31st, counsel said. Mr Ryan collapsed at home on the night of March 30th and died later.

It was claimed Mr Ryan had on March 3rd 2014 experienced severe chest pain with shooting pains into his arms and he made an appointment with Dr Neary at the Medical Centre for the next day.

It was claimed Mr Ryan was advised by the GP he had a burnt oesophagus and the pain in his chest and arms were caused by nerve endings touching the base of his oesopahagus.

It was claimed Mr Ryan’s symptoms continued and he had on March 14th telephoned the medical centre and allegedly reported ongoing chest pain and was advised to increase his medication.

Mrs Ryan contacted the medical centre around March 28th and her husband was booked in for an appointment on March 31st 2014.

However, Mr Ryan collapsed at the the family home in Co Louth on March 30th 2014 and was transferred to Our Lady of Lourdes Hospital, Drogheda where he was pronounced dead in the early hours.

An autopsy report stated the cause of death to be acute cardiac failure.

It was claimed there was failure to consider and investigate Mr Ryan’s symptoms and complaints and an alleged failure to refer him to hospital in a sufficiently prompt and timely manner or at all.

Approving the settlement, Mr Justice Kevin Cross sympathised with Mrs Ryan and her family on their loss and said it was a good settlement.