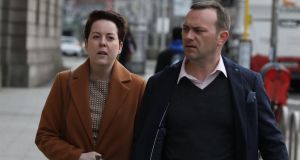 Two people who screened a Co Limerick woman’s smear slide for the MedLab laboratory in 2012, which came back as negative, have been withdrawn from the witness list for her action over alleged misreading of her cervical smears.

Mr Justice Kevin Cross said MedLab laboratory, which has withdrawn the witnesses, was entitled not to call witnesses.

The screeners who tested Ruth Morrissey’s 2012 slide are based at the MedLab laboratory in Sandyford, Dublin.

Ms Morrissey, a 37 year old mother of one who is terminally ill with cervical cancer, has sued the HSE and two US laboratories, Quest Diagnostics Ireland Ltd, with offices at Sir John Rogerson’s Quay, Dublin, and MedLab Pathology Ltd, with offices at Sandyford Business Park over alleged misreading of her smear tests taken under the CervicalCheck screening programme in 2009 and 2012.

On Thursday, her counsel Patrick Treacy SC said the screeners “are not turning up” and instead cytotechnologists and experts from the “Wisconsin hot bed of blind reviews” are being brought in to tell the judge who has to decide the case to “put his faith in blind reviews”.

Counsel said there is “a pattern” in “what is happening here”.

In relation to Quest Diagnostics, the whereabouts of one screener is not known and the other screener is in Chicago “and we are never going to hear from her”, counsel said.

“We are told now we are not going to hear from the screeners in Sandyford, Dublin for MedLab.”

He said MedLab was now trying to bring in two other screeners who reviewed the slides in the Wisconsin laboratory.

Conor Halpin SC, for MedLab, said it would be incorrect to say two screeners from Wisconsin were being called instead of those withdrawn from the High Court witness list.

Mr Justice Cross ruled the two cytotechnologists who reviewed the Morrissey slide in Wisconsin can give evidence by video link next week.

During Thursday’s hearing, Mr Treacy said this “test case” is being “swamped by Americans, hindsight bias and blind reviews”.

Giving evidence on behalf of Quest Diagnostics, he said he examined the Morrissey slide and believed it was negative.

It was “entirely reasonable” it was found to be negative, he said.

In the action by Ms Morrissey and her husband Paul Morrissey, of Monaleen, Co Limerick, it is claimed there was failure to correctly report and diagnose and misinterpretation of her smear samples taken in 2009 and 2012 and that her cancer spread unidentified, unmonitored and untreated until she was diagnosed with cervical cancer in June 2014.

It is further claimed a review of the 2009 and 2012 smears took place in 2014 and 2015 with the results sent to Ms Morrissey’s treating gynaecologist in 2016 but she was not told until May 2018 of those results which showed her smears were reported incorrectly.

The HSE has admitted it owed a duty of care to Ms Morrissey but not to her husband. The laboratories deny all claims.