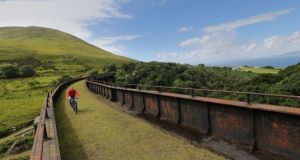 Gleesk Viaduct which is part of the proposed greenway will require repair. Photograph: Valerie O’Sulliva

Two separate High Court challenges have been initiated over a proposed cycling and pedestrian greenway in Co Kerry.

The actions relate to the proposed 32km South Kerry Greenway, between Glenbeigh and Caherciveen, to run mainly along the former disused Great Southern and Western Railway which operated from 1892 to 1960.

In the first action, a local farmer, James Clifford, and environmental activist Peter Sweetman, are seeking permission to challenge An Bord Pleanala’s decision on November 10th last to approve Kerry Co Council’s application for the greenway, which includes a 3m wide paved surface.

Represented by Margaret Heavey BL the applicants claim the board’s decision is invalid because it contravenes EU directives on Environmental Impact Assessments (EIAs) and Habitats.

They claim the decision failed to take required steps to establish a system of strict protection for the Kerry slug and the Lesser Horseshoe bat in their natural range.

Their action is against the Board, Ireland and the Attorney General.

If granted leave to bring the case, they will seek orders quashing the board’s decision.

They also claim a section of the 2000 Planning & Development Act does not comply with the State’s obligations under the EIA Directive because the State has allegedly failed to transpose into Irish law an obligation to determine if a road should be made the subject of an EIA.

A second challenge over the board’s decision has been initiated by members of a group representing local landowners whose lands are to be acquired for the greenway compulsory purchase orders.

Represented by Michael O Donnell BL they also want orders quashing the permission for the greenway.

Kerry County Council is notice party to both actions.

Both cases were briefly mentioned before Mr Justice Charles Meenan on Wednesday, before being adjourned to later this month to the High Court’s strategic infrastructure development and commercial planning list.

'Beautiful soul with bright career ahead' – tributes paid to stabbed teenager 17:46
Tourism sector calls for international travel to resume in second half of 2021 17:29
Most water extraction to go unregulated, environment groups warn 17:22
Woman sues Facebook over hacking of her account 17:48
Zero Covid strategy must be adopted to avoid recurring lockdowns – scientists 16:53