The High Court has ordered that a group of people occupying a house on Summerhill Parade in Dublin’s north inner city must vacate the property. Video: Bryan O'Brien 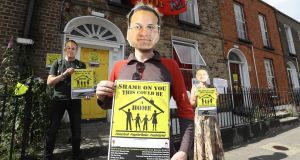 The High Court has ordered that people occupying a house in Dublin’s north inner city must vacate the property by 8am on Friday.

The court heard that of those houses number 35 is the only property occupied.

The application was not opposed. While more than 20 people were present in court for today’s hearing when the court registrar asked for any of the persons unknown in occupation to identify themselves he was greeted by silence.

The owner sought the orders due to fire safety concerns and because the house’s insurance coverage will be cancelled if the occupation, which has been described as a political protest and has been the subject of several recent media reports, continues.

Barrister Julia Lawlor Bl, instructed by solicitor Tony Reynolds for Mr O’Donnell told the High Court while the occupation was some sort of publicity-seeking form of political protest Mr O’Donnell had received an email from an anonymous sender which added to the urgency of the action.

Counsel said the email was entitled “drop dead” and told Mr O ’Donnell that if he did not drop the case there would be “hell to pay for you, your business and your family.”

Counsel added that the email also contained statements that were defamatory of her clients, which were not read in open court.

The property was occupied earlier this month, and those in occupation had refused to leave, counsel said.

Mr O’Donnell, who holds the properties in trust for the members of the pension plan. The court heard there are 67 members of the benefit plan, including 18 pensioners, who are employees and former employees of Pat O Donnell & Company.

At the High Court on Thursday Ms Justice O’Regan granted the owner various injunctions, which are to remain in place pending any full hearing of the action, compelling those in occupation to leave number 35.

The Judge said that the properties must be vacated by 8 am on Friday morning August 17th.

The court also made orders restrained anyone from interfering with the properties.

Notice of the orders is to be pinned to the doors of the various properties the Judge added.

The Judge also noted that an order granted on Wednesday requiring all those in occupation to identify themselves to the High Court had not been complied with.

That, and all other matters were adjourned to a date in October.

The Judge also granted Mr O’Donnell’s lawyers permission to return to court should any issue arise.

Previously the court heard the properties were vacated in May after a senior officer with Dublin City Council Fire Brigade raised fire safety concerns until all necessary upgrading had taken place.

Payments were also made to those who had to vacate the properties so they would have funds to find suitable alternative accommodation.

Efforts were also made to find alternative accommodation for some of the other tenants.

Works were scheduled to take place to refurbish the properties, but the actions of those in occupation had delayed those works.

The Fire Brigade has informed the owner that if the occupation continued it would have to take action against the owner.

Mr O Donnell was also been informed that the properties insurance will be cancelled if the occupation continued.

While various persons purportedly involved in the occupation have given interviews to media outlets but the owner was unsure exactly who and how many people are in the property.