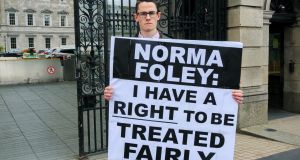 A file image of home-schooled Co Mayo student Elijah Burke who on Wednesday won a significant High Court judgement against a decision by the Department of Education to exclude him from the calculated grades process. Photograph: Collins

A Leaving Cert student home-schooled by his mother has won his High Court challenge against the Minister for Education’s decision to exclude him from the calculated grades process.

Elijah Burke had claimed the exclusion of students that were tutored by a parent or close relative at home from the calculated grades process breached his rights and was unfair and discriminatory and that he was being punished for being home schooled.

He claimed that as a result of the State’s decision he would not be able to progress to third level education for at least another year.

In a significant judgement delivered on Wednesday Mr Justice Charles Meenan held that so much of the calculated grade system that provides for the giving of estimated percentage marks that excludes home schooled students on the grounds that his teacher has a conflict of interest was “irrational, unreasonable and unlawful.”

The judge said the Minister had refused to give Mr Burke a calculated grade for each of the nine subjects he has studied because he had been taught by his mother Martina Burke, who is a qualified teacher, which was deemed to be a conflict of interest.

The court, noted that a system was in place in schools to deal with scenarios where a Leaving Cert student has been taught by a parent or close relative.

“I am satisfied that a non-conflicted or independent teacher or teachers ought to be involved in the place of Elijah’s mother in the system for the award of the estimated mark in each of the teen’s Leaving Certificate subjects.”

Should it be possible to award the student marks the process set out in by Department of Education for the awarding of calculated grades out of school learners can operate for Elijah, the judge added.

The judge said his decision was not based on any achievements obtained by Elijah or his siblings. Such matters, he said, were irrelevant to his decision.

He said he based his decision on what the court believes are the correct legal principles, and the decision is applicable to all students who find themselves in the same situation, irrespective of the achievements of abilities.

During the hearing the court heard that approximately 10 other students were in the same situation as Elijah.

Elijah, represented by Paul O Higgins SC, Brendan Hennessy Bl instructed by solicitor Eileen McCabe has applied to do a degree in either Biomedical Sciences or History with Music at NUIG.

The 18-year-old from Cloonsunna, Castlebar, Co Mayo, is one of ten siblings who have all been educated at home by their mother who have all excelled academically.

Elijah claimed the Minister acted unlawfully in failing to have in place a process for receiving and determining applications for calculated grades for pupils who are home schooled by a relative.

He brought judicial review proceedings against the Minister seeking various orders and reliefs after he was informed in mid-July that he would not be considered for a calculated grade because he had been tutored at home by his mother.

Opposing the application, the Department of Education argued it was not possible to give Elijah a calculated grade for any of the nine subjects he has studied due to an absence of credible evidence from an appropriate source on which to base a grade.

This was because Martina Burke was in a position of direct conflict of interest and that accepting estimated marks from a family member would undermine the integrity and credibility of the process.

The State denied that his rights were breached and said that he could sit the Leaving Cert in November. The system had been brought in due to the global health emergency caused the Covid19 pandemic.

It was also argued that there was a lack of credible, independent evidence upon which Elijah, who did not sit the Junior Certificate Examination could be given a calculated grade.

The judgement was delivered by electronic means and final orders in the case will be mentioned before the Court at a later date.

1 Ireland should allow controlled spread of Covid-19 among under-60s, Swedish expert to tell committee
2 Ireland’s top earners ‘do not see themselves as rich’, study finds
3 Dublin ‘could go to Level 4 or Level 5’ if cases continue to rise
4 Miriam Lord: Let’s call a spad a spad – this Government has woeful timing
5 IRA chief of staff tipped off gardaí about Arms Trial guns, says Seán Haughey
Real news has value SUBSCRIBE