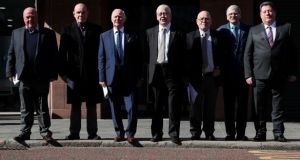 The Government is to appeal the European Court of Human Right’s finding that 14 men in Northern Ireland were not tortured when detained by the British Army in 1971.

The announcement of the appeal to the ECHR’s Grand Chamber of a ruling made last March comes the day after a daughter of one of the men, Mary McKenna, whose late father Sean McKenna was one of the detainees known as “the hooded men,” brought proceedings against the State.

She had sought an order from the High Court compelling the Government to urgently inform her if the State intended to appeal the ECHR’s finding to the Grand Chamber of the ECHR.

On Tuesday Michael Halleron of Madden & Finucane solicitors for Ms McKenna said in a statement: “I have received a call from the Department of Foreign Affairs to inform me that a decision has been made by the Irish Government to refer the case to the Grand Chamber of the European Court of Human Rights.”

“This is a significant decision. A referral to the Grand Chamber allows Ms McKenna on behalf of her father, as well as the other applicants, another opportunity for the judgement made in 1978 to be revised, insofar as the five techniques on persons interned in Northern Ireland in 1971 constituted inhuman and degrading treatment but not torture,” he added.

In 1971 Mr McKenna and 13 other men were subjected to various techniques of interrogation and sensory deprivation practices by the British Army following their detention.

He was released into a psychiatric hospital and died in 1975.

Supported by medical evidence, Ms McKenna believes his death was directly attributable to the treatment he suffered while imprisoned.

The Government brought a case against the UK over their treatment but the ECHR in 1978 found the men’s treatment, while inhuman and degrading, did not constitute torture.

In 2014, after new information was disclosed by RTÉ that was not previously available to the ECHR that showed the UK knew of the long-term effects the interrogation techniques used on the men would have, the Government requested a revision of the 1978 decision.

The Government had until June 20th to seek to have the ECHR’s refusal referred to the Grand Chamber, which is the ultimate court of the European Court of Human Rights.

Ms McKenna brought High Court proceedings after being informed by the Minister for Justice that any decision by the Government to appeal the decision would be made on June 19th following a meeting of the Cabinet- the day before the deadline.

Ms McKenna said this was insufficient time to allow her to consider and if necessary challenge any decision not to pursue an appeal.

In proceedings against the Minister for Justice and Ireland Ms McKenna, from Newry, Co Down sought an order compelling the respondents to provide a determination and reasoning on whether they will appeal the ECHR’s decision to the Grand Chamber.

The action was brought on grounds including the respondents have not made a decision if they will appeal within a reasonable time.

Mr Justice Seamus Noonan adjourned the matter to Wednesday’s sitting of the court.