All bank dealings frozen by president of High Court 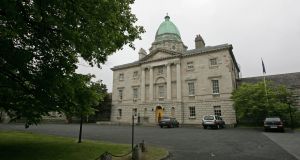 Castleknock solicitor Patrick Delaney, who was stated to have failed to co-operate with an investigation of the Incorporated Law Society of Ireland, was on Monday suspended from practising as a solicitor.

The president directed that all monies held in any bank account relating to both companies should be paid to the Law Society and that all documents and computer codes be made available to the society to assist in its inquiries.

The judge said that investigating accountant Rory O’Neill had been appointed to conduct an investigation in relation to the affairs of Mr Delaney’s companies and had informed the court as to the history and success of his inquiry to date.

The court had heard of Law Society concerns in respect of several different clients and the factual background giving rise to those concerns. Mr Delaney had previously been called upon to make files available to Mr O’Neill but had not done so.

The judge said two specific matters had been drawn to the society’s attention in the form of complaints where clients had raised concerns in relation to the non-closure of a €120,000 mortgage and in the second case about an estate of €248,000.

The judge said he was satisfied Mr Delaney had been served with a motion before the court seeking to suspend him forthwith from acting as a solicitor. He had not turned up before a committee of the society and again had not attended court today.

The judge said he was directing that Mr Delaney be suspended forthwith in order to protect members of the public and existing clients of Mr Delaney. He also directed that anyone with notice of the making of the court orders give the Law Society access to Mr Delaney’s offices forthwith.

Irish flight bringing PPE from China due in Dublin in afternoon 10:29
Coronavirus: Sweeping powers with fines of up to £5,000 come into force in North 07:56
Leading Northern Ireland lawyer in critical condition because of coronavirus 22:12
Coronavirus: No funeral Masses to be held in Clogher diocese 22:03
Coronavirus: 14 more deaths as list of essential workers published by the Government 21:52