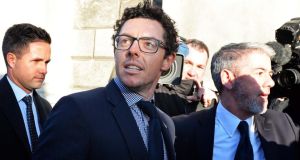 Work on drawing up the settlement in golfer Rory McIlroy’s legal dispute with his former agent is continuing, the High Court heard on Tuesday.

Rossa Fanning BL, for McIlroy, told Mr Justice Brian Cregan the parties were continuing to work towards approving a settlement following an agreement announced to the court earlier this month.

The matter could be put back for another week, counsel said. Mr Fanning said this had been agreed with the other side and “I don’t think there is any benefit in giving any details at this time”.

McIlroy claimed he entered into improvident representation agreements in December 2011 and March 2013 with the agent. The defendants denied his allegations and counter-claimed.

Mr McIlroy was not in court on Tuesday. He attended the first day of the scheduled eight-week hearing which never got underway after talks began earlier this month.

After an agreement was reached, a statement from McIlroy and Horizon said thematter had been “settled to the satisfaction of both parties who wish each other well for the future”.

The case had been fast-tracked to the High Court’s big business division, the Commercial Court, in October 2013. Mediation talks took place but were not successful.