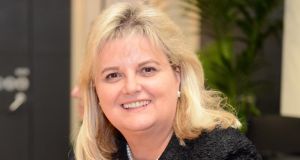 The Rehab Group claims it is entitled to an indemnity from its former chief executive Angela Kerins in relation to defamation proceedings brought over the charity’s denials of a developer’s claims .

John Kelly claimed he gave Ms Kerins use of a helicopter, a private jet and hospitality worth €100,000 with a view to securing rights to buy Rehab’s property at Roslyn Park, Dublin 4.

On Monday, Rehab secured a High Court order joining Ms Kerins as a third party to Mr Kelly’s defamation proceedings against the charity.

In seeking that order, Rehab claimed it was induced by Ms Kerins into issuing the alleged defamatory statements and they were issued on her instructions that Mr Kelly’s claims were untrue.

Mr Kelly initiated his claim last June in proceedings including a claim for aggravated and exemplary damages.

Mr Justice Anthony Barr told Karyn Harty, solicitor for Rehab, he considered it appropriate to grant her application to join Ms Kerins as a third party.

The application was grounded on an affidavit from Alison Diamond, another solicitor for Rehab, which said Mr Kelly is seeking damages for loss and damage allegedly suffered as a result of alleged defamatory statements published by Rehab to media outlets in March and April 2014.

Liability was fully at issue and Rehab would rely, inter alia, on the defence of qualified privilege.

Ms Diamond said she was instructed Ms Kerins was chief executive of Rehab at the time of the alleged publications.

When queries were raised of Rehab about a March 2014 newspaper article alleging Mr Kelly had given Ms Kerins use of a helicopter, private jet and hospitality worth €100,000, Ms Kerins expressly represented to Rehab those claims were entirely untrue, Ms Diamond said.

She said Ms Kerins insisted she had no dealings with Mr Kelly other than of a social kind and certainly did not have discussions with him in respect of the transfer or sale to him of Rehab’s property at Roslyn Park.

Ms Kerins had signed off on a statement issued to the media by Rehab, Ms Diamond added.

Mr Kelly later wrote to the Dáil Public Accounts Committee and was reported to have alleged he had provided certain hospitality and services to Ms Kerins with a view to securing rights to purchase the Roslyn Park, the solicitor said. To date, Rehab had not been provided with a copy of that letter.

At all material times, Ms Kerins lead Rehab to believe the allegations were false and defamatory and it was on that basis the statements were issued on the instruction of Ms Kerins, she said. In the circumstances, Rehab was entitled to an indemnity from Ms Kerins in respect of Mr Kelly’s claim.

Louis McEntagart SC, for Mr Kelly, did not object to the “unusual” application to join Ms Kerins but asked to be copied with legal documents exchanged between Rehab and Ms Kerins. He wanted directions regarding the issues because this matter had to go in front of a jury, counsel also said.

Ms Harty said it was open to Mr Kelly to seek to have the action heard before a jury “but we’re not there yet” and added she did not regard the third party application as “unusual”.

Mr McEntagart said he was using the word unusual as the application could lead to contractual or other issues being ventilated.

The judge directed the third party notice and statement of claim be served within four weeks and said copies of those, and of subsequent pleadings exchanged between Rehab and Ms Kerins, should also be served on Mr Kelly’s side.

Covid-19 in a cramped flat: ‘It was the most horrible time of my life’ 01:50
Unions warn of move away from negotiations if no pay deal by Christmas 01:45
Hundreds of health staff unavailable every week due to coronavirus 01:26
Cannabis plan for State-owned bogs goes up in smoke 01:23
Europe needs ‘serious acceleration’ in fight against Covid-19, warns WHO 01:16