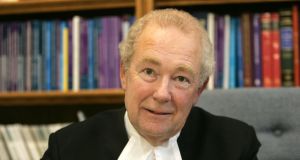 The President of the High Court, Mr Justice Nicholas Kearns, has said “comfortable assumptions” that legal fees should continue as before “without the slightest regard for privations experienced by citizens”, including other professionals, does not serve “the interests of justice”. Photograph: Alan Betson

The President of the High Court has said “comfortable assumptions” that legal fees should continue as before “without the slightest regard for privations experienced by citizens”, including other professionals, does not serve “the interests of justice”.

Mr Justice Nicholas Kearns made the remarks in a significant decision on fees claimed in a medical negligence case. He upheld a Taxing Master’s decision cutting to €276,000 the €485,000 claimed by Augustus Cullen Law, Wicklow, for a solicitors instruction fee based on a rate of €375 an hour. The defence had offered to pay a €250,000 instructions fee.

A senior counsel in the case, Denis McCullough, had claimed a €125,000 brief fee on grounds the novelty and complexity of the case in the case meant it took him 100 hours to read the brief, plus daily refresher fees of €3,500, the judge noted.

The Taxing Master did not accept the case (concerning a child with cerebral palsy whose mother’s Rhesus incompatibility disease was allegedly not properly managed prior to birth) was that complex or novel.

Mr McCullough later accepted an “appropriate” brief fee of €65,000 and no review of that was sought, the judge said.

In appealing the reduced instruction fee, the solicitors made several arguments, including that the Taxing Master paid inadequate regard to cases where larger fees were measured or agreed even after the economic downturn, including two cases in 2011 involving instruction fees of €400,000 and €380,000, and a third case involving a €455,000 fee.

He personally believed the Bar Council and Law Society are “acutely aware” the best interests of the profession are served by sharing in the same way as other professionals in “some realistic and proportionate readjustment” to expectations which might have been the norm before financial difficulties began.

The solicitors in this case had, since the Taxing Master’s ruling, accepted lower fees than they sought here and he did not accept they were “driven” to do so as a result of the ruling.

While there had been some levelling off or even reductions in legal costs recently, the Taxing Master could best give effect to that in a manner that would satisfy practitioners, perhaps also the public “and more importantly, serve the interests of justice and transparency”.

He agreed with a 2010 decision by Mr Justice Peter Kelly reducing by 16 per cent (based on the economic crisis and similar cuts in the public service) a €425 an hour charge out fee sought by an examiner.

Mr Justice Kearns said he had applied similar cuts in insurance and credit union examinerships and, in some cases, the professionals involved had agreed to reductions. He suspected greater reductions have been sustained since.

There was “absolutely no reason” why a similar approach should not be taken by the Taxing Master to claims for legal fees and, in that context, historical comparators would be of limited value. Comparator cases are effectively a “a hall of mirrors” and have a far more important role to play in times of financial and economic stability than of economic and financial turbulence.

He suggested the Taxing Master might annually seek the views of an economist about pay cuts in various professions to assist as guidelines for appropriate legal costs. That could also lead to increased fees if economic or financial changes warranted it.

It was alleged Dr Corr was guilty of negligence in managing the ante-natal care of Mrs Sheehan, whose blood contained antibodies against Rh(e). It was claimed the alleged negligence led to Isabelle being born in poor condition and she ultimately developed cerebral palsy.

In November 2010, negligence was admitted but causation remained an issue until conceded in September 2011. The case proceeded to assess damages only and settled on October 24th 2011 on an interim basis for €1.9 million after a five day High Court hearing, pending enactment of legislation governing periodic payments in such cases. The High Court was told the full capital value of the claim was some €8 million.

A further interim payment of €635,000 was secured in late 2013 after another “protracted” High Court hearing, Mr Justice Kearns said. Costs issues concerning that hearing might, unfortunately, be subject of another taxation process unless there was agreement, he added.

Dismissing various grounds of appeal against the Taxing Master’s ruling, the judge rejected claims this was a “David and Goliath” situation. This law firm was one of the most experienced in Ireland dealing with plaintiff medical negligence litigation and the plaintiff was represented by a very experienced team of counsel, including Mr McCullough, the “foremost senior counsel” practising in medical negligence litigation.

On claims the Taxing Master failed to properly address the time devoted to the case, the judge noted there was no agreement between Ms Sheehan and her solicitors to charge fees based on time expended or on appropriate hourly rates.

An hourly rate of €375 was introduced by the legal costs accountants for the plaintiff when he was explaining how he assessed the solicitors instructions fee but that rate was not suggested or applied by the Taxing Master, the judge said.

Apart from time records for the last few months of the case, the solicitors provided an “unhelpful estimate” of between 1,000-1,200 hours expended on the file without any breakdown with regard to specific pieces of work. Some 51 hours of double entries were noted on taxation but no reduction on the sum claimed took place, he added.

There must be identification what work was done, who did it, how long it took and the appropriate rate for the nature of the work, he said. The Taxing Master’s own assessment was based on a “root and branch” examination of the actual work carried out, he ruled.

The Taxing Master was not obliged to make allowance for the fact the case was taken on a “no foal, no fee” basis and there was no basis for the plaintiff’s solicitor receiving an additional €100,000 by reference to “intangibles”, he added.

While there were some errors by the Taxing Master, none warranted any interference by the High Court in the ruling, he concluded.