Jury discharged in December after it failed to reach a verdict 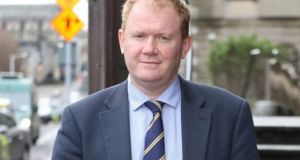 Paudie Coffey at the Four Courts during the third week of his High Court action. File photograph: Collins

Fine Gael Senator Paudie Coffey has settled his High Court action over a newspaper article which he said defamed him when he was likened to an 18th century highway robber in an article about boundary changes in south Kilkenny.

Following a 13-day trial last December, the jury was discharged on December 11th after it failed to reach a verdict, having deliberated for 11 hours over two days.

Mr Coffey, a former TD and former minister of state for the environment, now a Senator, sued Iconic Newspapers and journalist Sam Matthews, publishers of the article in the Kilkenny People on January 15th, 2016.

The article, headed “Coffey the Robber”, stated fellow FG TD John Paul Phelan had launched a furious broadside on the then minister of state accusing him of trying to “rob” a chunk of south Kilkenny.

He claimed the words falsely meant, among other things, he was guilty of misuse of public office and was a person of severe ill-repute, akin to an 18th century highwayman from Waterford. Sen Coffey comes from Waterford and lives in Portlaw.

The defendants denied the article, based on a press release issued by Mr Phelan, was defamatory.

After the jury was discharged, the case was put back into the list to fix dates while the issue of the costs of the 13-day trial was to be dealt with separately.

When this costs matter came before Mr Justice Bernard Barton on Wednesday, Richard Kean SC, for Mr Coffey, told the judge he was “very relieved and pleased to say the entire matter is resolved” and as part of the resolution a statement was to be read out by Rossa Fanning SC on behalf of the defendants.

The statement said the defendants “confirm they never in any way questioned the honesty of Sen Coffey and acknowledge him to be a politician of integrity and wish him well in his future political career.

“The defendants regret any upset caused by the article to Sen Coffey and his family”.

Mr Fanning said the online version of the article had been taken down and will not be republished.

Counsel also said that on consent between the parties the court could strike out the proceedings and make no order as to costs, other than an order vacating previous costs orders.

Mr Justice Barton said the court was pleased the parties had been able to resolve the matter and he made the orders as requested with no further order.

After the case solicitor Georgina Robinson read out a statement on behalf of Mr Coffey.

“My client wants to welcome the conclusion of the case today and the fact that we have reached an agreement to settle the case. Senator Coffey is pleased that Iconic Media Group have recognised his good name and reputation and have stated that he is a person of integrity.

“My client also welcomes the fact that the defendants regret the upset caused to him and his family due to the article being published in the Kilkenny People Newspaper on 15th January 2016.

“Senator Coffey took this case to protect his family name as he was always very conscious of teh good name and reputation of all his family and the good standing the Coffey name has in the community and beyond.

“My client would like to remember especially today his late father Pat Coffey, his late mother Eileen Coffey and his late sister Ita Coffey.

“Senator Coffey is pleased that the Iconic Media Group has agreed to remove this article and any references to it, from all their associated websites and social media platforms.

“My client is glad to be able to put this case behind him and looks forward now to continuing as a public representative in the Oireachtas with his good name and reputation intact. “As the Fine Gael candidate for the upcoming general election in the constituency of Waterford; Senator Coffey looks forward to focusing on the next general election and contesting it whenever it may be called.

“The matter is now concluded and my client will be making no further comment in relation to this case.”

Healthy one day, ventilated the next – a Covid-19 survivor’s story 03:08
HSE signs deal with German lab to add ‘surge’ testing capacity for winter 02:34
Covid-19: HSE agrees deal with German lab to boost testing capacity 02:16
Replacement wards of court system to be delayed without Budget funding 01:46
HSE’s contact tracing service at its busiest since peak of outbreak in mid-April 01:02