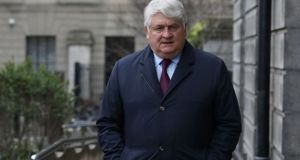 Denis O’Brien was a “fish out of water” among the 22 as he was not a “developer king”, not under huge financial pressure, Paul O’Higgins SC said. Photograph: Collins

Denis O’Brien’s defamation case against the Sunday Business Post “deserves to be thrown out on its backside”, a High Court jury has been told.

Michael McDowell SC urged the jury not to “fall for this phoney effort” to persuade them Mr O’Brien was defamed in articles of March 15th 2015.

There was no defamation and Mr O’Brien had come to court “spoiling for a fight”, he said.

Mr O’Brien wants to “put down” people who are “decent, honourable, truthful journalists who keep our democracy going by telling us the truth”, he said. These were people who were careful and who got the articles “lawyered”.

The jury heard closing addresses from both sides in the case on Tuesday and will be instructed in the law by Mr Justice Bernard Barton on Wednesday before retiring to consider their verdict.

The articles named Mr O’Brien as among the 22 biggest borrowers from Irish banks in 2008 and their focus was a confidential PwC report to the government about the exposure of Ireland’s banks in 2008. Journalist Tom Lyons got a copy from a source in 2015 and shredded it shortly after the articles were published to protect the source. Mr O’Brien claims the articles wrongly meant he was among a “gang” of 22 borrowers who “wrecked the country”, they defamed him and injured his reputation. The defendant, Post Publications Ltd, denies the words mean what he alleges, denies defamation and malicious publication, and has pleaded “fair and reasonable publication on a matter of public interest”.

He said Mr O’Brien has come to court to get damages because he “wants to exercise power” over the SBP and “punish people whom he claims were malicious towards him”.

Mr O’Brien had been “vicious” in some of his evidence towards Mr Lyons and former SBP editor Ian Kehoe, he said.

Mr Lyons and Mr Kehoe had given evidence that because of the “fear factor” concerning Mr O’Brien, they had considered leaving him out of the articles but explained they could not be reduced by threats or fear of litigation by making no reference to Mr O’Brien. That evidence “rings true and is true”, counsel said.

The PwC report put Mr O’Brien as number 10 of the 22 biggest borrowers from Irish banks in 2008, he said. No-one in 2015 who construed the articles as meaning Mr O’Brien faced financial pressure in 2008 could, when also told he had repaid all his loans, was the best customer of Irish banks and a successful mobile phone and media entrepreneur, consider that defamatory, he said.

It was untrue to say Mr O’Brien was given a central role in the coverage, the story was “simply not about him”, he said. It was also incorrect to say a pen picture of Mr O’Brien in one article was a “needle in the haystack” in the context of the overall coverage. That piece contained information from the PwC report and said he had repaid all his debts to Anglo and is one of AIB and Bank of Ireland’s best clients. The articles contained no criticism of Mr O’Brien, he said.

“Not one word of defamation, not one word of criticism against him, just truth,” counsel said. If the jury found this was a fair and reasonable publication on a matter of public interest, there was no defamation and no damages, he said.

Earlier, Mr McDowell said there was “false” evidence from Mr O’Brien concerning communications between him and the former owner of the SBP, Conor Killeen.

Mr O’Brien insisted there was such correspondence but had not produced it, he said.

Mr McDowell also urged the jury to reject evidence from Mr O’Brien that being referred to as a developer is defamatory and that he is not a “developer” involved in development.

Mr O’Brien had described a number of situations, including his purchase of a two-storey premises in Donnybrook with a view to building a 26-storey block of apartments, he said. If you knock down a two-storey building and propose to build 26 storeys, whether keeping that for yourself or not, that’s a developer but Mr O’Brien “brazenly denied that”, he said.

The jury, he said, should also reject Mr O’Brien’s “folksy phoney false account” that the reason he put a golf and leisure resort at Quinta da Lago in Portugal for sale for €220 million arose from remarks by his wife and he took it off the market because his elderly mother really liked the resort.

In the closing address for Mr O’Brien, Paul O’Higgins SC said Denis O’Brien is “not out to destroy” anyone in bringing a defamation case over articles in the Sunday Business Post.

Mr O’Higgins said Mr O’Brien has sued because he was included among 22 people in articles which meant the 22 were most to blame for destroying the Irish banking system in 2008.

Counsel said a lot had been said about this case being “vicious” and there was an attempt on behalf of the SBP to “turn it on its head” by making the SBP the “victims”. Mr O’Brien was not out to personalise the case or destroy anyone and he had sued the SBP and not the journalists involved in the articles although he would have been entitled to do so, he said.

For the standards of a broadsheet newspaper, the “get up” of the articles was “sensationalistic, heavily coloured and deigned to wow you from the very front page”. The front page article was headlined “22 men and €26 billion” and meant Mr O’Brien was one of 22 borrowers most to blame for the destruction of the Irish banking system and subsequently bailout, he said. That was the meaning conveyed and “that is defamatory”.

Mr O’Brien was a “fish out of water” among the 22 as he was not a “developer king”, not under huge financial pressure, not “massively overstretched” and had brought €600 million back into the country. It was also “exceptionally unfair” to list him in a front page graphic among seven other people who had “huge problems”.

He was “singled out for special treatment” and included among “developer kings” when the SBP knew his main business was not development and he had no exposure to development loans. A reference in one article to a “frightening” picture of “reckless lending” meant there was also reckless borrowing, he said. Malice is an “important component” of Mr O’Brien’s case, he said.

Malice was not about hating a person but rather about whether there was an indirect motive for what was written, whether the defendant knew it was not true or was reckless whether it was true or not.

Mr O’Brien maintained what was printed was malicious because the articles meant what he alleged and it was “hard to see” the SBP did not know the facts and that they had “very little to do” with Mr O’Brien.

The SBP had given the jury “something of a Halloween brack of a case”, with “bits of raisins and peel” but the onus was on the SBP, if it wished to say an article was true, to plead that and the SBP has not done so and rather says something else, he said.

The article had put the “heaviest of heavy emphasis” on land and development when Mr O’Brien had no exposure to development loans. Mr O’Higgins also said the test is what a reasonable reader would understand from the articles. Such a reader is not presumed to have noticed everything in the articles and is highly unlikely to have noticed with any great impact “some small qualification” at the end, he said.

There is “no mastermind rule” in a defamation case, that a reader has started and thus will finish. Rejecting the defence of reasonable publication on a matter of public interest, Mr O’Higgins said this publication was in some respects in good faith but it was not good faith to put a “teaser” on the front page concerning Mr O’Brien “before eventually saying he was not responsible for that at all”.

The articles included 21 words positive towards Mr O’Brien, he said.