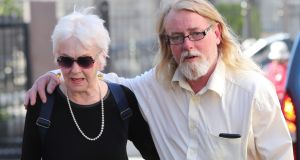 A woman who spent more than 50 years searching for her son has told the High Court she was told by a nun that adopted children want nothing to do with their birth parents.

Tressa Donnelly Reeves said she gave birth to a boy on March 13th, 1961 and named him Andre in the hope he would be “the only Andre” in Ireland and she would find him.

He was placed with a family at Liscolman, Tullow, Co Carlow and given the name Patrick Farrell.

The mother and son were eventually reunited in 2013 after a long battle for information which they claim they were entitled to, but were allegedly denied.

Giving evidence on the second day of her action against St Patrick’s Guild (Incorporated) adoption society, which was run by Catholic nuns, and the State, Mrs Reeves said she was encouraged not to look for Andre.

Her mother had told her it would be “disruptive for the child”.

She said her mother also told her not to tell anyone she had had a baby, particularly a man, as she would have been seen as “soiled goods”.

She was unmarried and aged 21 when she was sent to Ireland to have the baby. Her friends were told she was going to Dublin to learn “Cordon Bleu cookery”.

She accepted she had signed a consent for Patrick’s adoption days after he was born.

In reply to her counsel Eanna Mulloy SC she said she sent letters inquiring about the infant to a nun with St Patrick’s and was told in reply he was placed with an Irish family.

She said, in the early 1970s, she returned to Ireland and attended at St Patrick’s office in central Dublin where she spoke to a nun about her son and gave her details relevant to the birth.

She said the nun “wanted to get rid of me” and told her St Patrick’s had “no details” about Andre’s birth.

The nun also said “adopted children never want anything to do with their birth parents, especially the boys”, she said.

Mrs Reeves said she left St Patrick’s office and returned to where she gave birth to Andre, a clinic in Clontarf where she met the midwife who had delivered her son and whom she had been friendly with.

When she asked the midwife about Andre, she said she was told he was among babies that were sent to the US and it would be impossible to trace him as there was “no paperwork” in regard to those adoptions.

She said she was shocked by this as she had been informed in the correspondence she received from the nuns in 1961-2 Andre was sent to a family “down the country”.

She renewed her search for her son in the mid 1990s after speaking to her Sligo based cousin, who stayed at her then home in Belgium.

Her cousin told her of TV reports about changes concerning entitlements to information concerning adopted children in Ireland.

In their action against St Patrick’s and the State, Mr Farrell and Mrs Reeves claim the adoption was unlawful and done without legal safeguards provided under the adoption laws.

They want damages on grounds including claims the society made false representations concerning Patrick’s location. It is also alleged it engaged in conspiracy, deceit and failed to provide them with information about each other in a timely manner.

It is also claimed there was a failure to protect their family rights and the son was placed with a couple, the now deceased Maeve and James Farrell, whose suitability was never assessed.

The State, it is alleged, failed to vindicate or recognise their personal and family rights. The claims are denied.

The State parties also plead they are a stranger to the claims and are not liable for any wrongs committed against the plaintiffs.