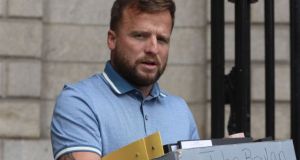 The High Court has ruled that a man bought 90 per cent of the Cheltenham-winning horse Labaik with the proceeds of crime.

In a case taken by the Criminal Assets Bureau against John Boylan (33) aka John Power, of Forest Hill, Rathcoole, Co Dublin, the court also found that a west Dublin property – refurbished at a cost of €630,000 – a bank account containing €77,900, a mobile home worth €33,000, and a 2015 Mercedes Benz E Class were acquired with the proceeds of crime.

Mr Boylan, who runs an animal feed business and claimed he earned “considerable sums” gambling, denied the allegations. He purchased his stake in the racehorse for €28,000 in April 2016.

However, at the High Court on Friday Ms Justice Carmel Stewart ruled that an examination of Mr Boylan’s finances shows a “substantial shortfall” which left her with the “inescapable conclusion” the items were directly or indirectly the result of the proceeds of crime.

The judge also dismissed plenary proceedings which Mr Boylan took against the Criminal Assets Bureau, which was represented by Benedict Ó Floinn BL.

Ms Justice Stewart noted that in an affidavit to the court, Mr Boylan said he set up Forest Hill Animal Feeds Limited in June 2016 and still works for this company, earning €419.56 per week.

She said he also claimed he “earned considerable sums from gambling”.

The court heard Mr Boylan’s partner Leonie Kinsella told the court, in an affidavit, that Mr Boylan was the main earner of the household but that she also earned money from hairdressing. She said she set up a hairdressing business in May 2016.

However, in her written judgment, Ms Justice Stewart found: “There remains a substantial shortfall which leads this court to the inescapable conclusion that the assets the subject of these proceedings were acquired, in whole or in part, with or in connection with property that, directly or indirectly, constitutes the proceeds of crime and further that the property constitutes directly or indirectly the proceeds of crime.”

Mr Boylan brought the proceedings against Cab claiming he suffered a financial loss arising out of an injury the horse sustained at a race on April 28th, 2017.

He claimed it was Cab’s decision for the horse to race.

However, on Friday the judge found the value which Mr Boylan gave the horse was “exaggerated and, at a minimum, speculative”.

Ms Justice Stewart also said Cab had acted appropriately and she was satisfied there was no mala fides or any act of negligence committed by Cab – as alleged by Mr Boylan.

She also said the decision to run the horse in Punchestown in April 2017 was made by Mr Elliott and facilitated by Cab.

The judge also said she found Mr Elliott be a “truthful and candid witness”.

Labaik shocked the racing world when he won the Supreme Novice’s Hurdle at Cheltenham in March 2017 at odds of 25/1.

The horse’s passport was seized by Cab officers the following month, which meant the horse couldn’t travel.

It was handed back to horse trainer Gordon Elliott, who has no involvement in crime and whom the court heard owns 5 per cent of Labaik, ahead of the Champion Hurdle at Punchestown in April 2017, where Labaik suffered an injury.

At a previous hearing, the court heard Det Garda Lisa McHugh say, in an affidavit read to the court, that Boylan had 67 previous convictions, including two drugs offences.

At the end of today’s proceedings, the court heard that the horse is free to race and there may be plans for it to race in November or December of this year.