Mother urged by High Court not to undermine daughter’s placement 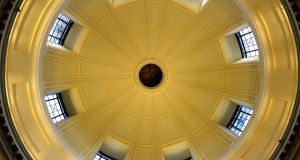 The president of the High Court has urged the mother of a woman with Down syndrome to “do her best” to support her daughter’s continuing placement in a residential care unit and not act to undermine it.

The woman, a ward of court aged in her 30s, has shown considerable improvement in her physical and mental health since being placed in the care unit from a home situation where it was reported she presented as neglected and distressed, the court heard.

Her mother and another sibling have been placed in transitional housing conditional on a barring order being made against her father but there are signs he is at the mother’s accommodation, David Leahy BL, for the HSE, also outlined.

There are additional concerns about community violence and the Covid-19 situation as the woman has difficulty maintaining physical distancing with her mother, he said.

A social worker was strongly of the view the woman needs ongoing care and protection and had concerns about her having access visits to the mother’s home as the mother desired, he said.

When the case came before High Court president Ms Justice Mary Irvine on Monday, Mr Leahy said the HSE was seeking an unusual order in that it wanted the placement extended for two years. The general solicitor for wards of court, previously appointed as the committee to represent the ward’s interests, supported an extension of some 18 months, the court heard.

Mr Leahy said the normal position is a ward’s situation is reviewed after six months but, in this case, the mother expects her daughter to return home and gets distressed around each review, leading to the ward also being distressed.

The HSE wants to avoid the ward further distress and wanted the court to give a “strong message” to the mother and family it is important the daughter believes the placement is her permanent home for the medium to long term, counsel said. If the placement and protective orders are extended for 18 months to two years, the HSE believed that will “get the message through”.

Whether deliberate or not, there is some history of the family undermining the ward’s placement, counsel added.

Counsel for the mother said her client only found out on Friday afternoon the matter was before the court on Monday, her solicitor was unaware of that, papers had not been served and she wanted an adjournment. There are issues about access to the ward and the mother is very anxious to participate, counsel said.

Mr Leahy said the mother’s involvement in the matter has been “somewhat sporadic” and the HSE had, in this difficult application, proceeded on the basis of the best interests of the ward.

Ms Justice Irvine said, as the HSE was seeking to have the case reviewed in two years, and an addendum to the court order concerning the placement being viewed by the family as a medium to long term one, the mother should have an opportunity to be heard.

The judge listed the matter for next week and also agreed to direct the mother to do her best to let her daughter know her placement is long term and the mother was supportive of it and would not undermine it.