Right to speak freely in the Dáil remains undimmed. As do rights of the free press 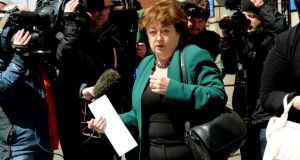 So what now for Denis O’Brien’s unmentionables? Despite the best efforts of his lawyers, they’ve been flapping in the wind since last Thursday night when Catherine Murphy pegged them out in Dáil Éireann.

There was a further attempt to ventilate them in the Four Courts yesterday. And they’re due to get a decent airing today (bar a few redactions).

But like any other ordinary Irishman and proud “republican with a small “r” who is resident outside the country for tax purposes, Denis feels strongly that his unmentionables are nobody’s business but his own.

Over the weekend in the teeth of a gale, the media mogul tried his best with the help of faithful retainer James Morrissey to take them in off the line and bung them back in the sock drawer. They weren’t entirely successful in this endeavour.

In fact, it only served to make people more interested in O’Brien’s unmentionables. But he is equally determined to keep them under wraps.

Their attempts to allegedly silence sections of the media from reporting what Murphy said in the national parliament set off a series of chain redactions that caused considerable angst and confusion in journalistic and political circles. It led to RTÉ and The Irish Times lining up against poor Denis in the Four Courts yesterday morning.

Thankfully, his senior counsel clarified matters for people who may have been under the impression that, by firing off solicitor’s letters to various organs warning them off reporting what had been said in the Dáil, Denis may have been trying to suppress the dissemination of information. Or stick his oar into the constitutionally protected conduct of Dáil Éireann.

That hadn’t been intended at all, explained DOB’s lawyer, Michael Cush. It was never his client’s intention to seek to restrict what deputies can say in the Dáil, he stressed.

Indeed, he relayed the heartening news that Denis is of the view “it is only right” that newspapers and RTÉ should be able to report what is said in the national parliament.

Which, it must be said, was very big of the billionaire and he is to be commended.

“A spectacular climbdown,” harrumphed David Holland, representing RTÉ, while simultaneously not wishing to be “churlish”.

Denis, by the way, wasn’t present, although he was writ large all over page 5 of yesterday’s Irish Times. But his representative on earth, former journalist James Morrissey, sat in the public gallery.

Both still allege Deputy Murphy’s information is wrong, that she has “lied” to the Dáil and is relying upon stolen and altered documents in her dogged determination to get to the bottom of O’Brien’s unmentionables. Not that they are being churlish either.

But wait. Did this gracious concession in terms of reporting apply to future Dáil utterances concerning O’Brien, or just the ones currently at issue?

There is still the small matter of an injunction taken out against RTÉ in relation to an investigation by the broadcaster into certain aspects of O’Brien’s banking arrangements with IBRC.

Judge Donal Binchy decided to step in and clarify the issue of his injunction. It was never his intention that the order should be construed as restricting the fair reporting of Dáil business at any time.

This came as a tragic bombshell to some of the journalists present who had been hoping his Lordship might also see his way to granting a permanent order prohibiting the dissemination of waffle, baloney, obfuscation and general grandstanding from the chamber.

But you can’t have everything.

As O’Brien, an ordinary media mogul just trying to preserve his financial modesty in the face of outrageous prying by certain journalists and Catherine Murphy, found out over the weekend.

Sometimes it’s impossible for a guy to get a break in this town.

His unmentionables are all over the media now.

Today, the judge will release his judgment outlining the reasons behind his decision to grant O’Brien a temporary injunction against RTÉ, preventing the broadcaster from putting details of his dealings with the IBRC into the public domain.

“Alice in Wonderland would find it difficult to adequately represent this situation.”

If that means mentioning a powerful man’s dealings with a State-owned bank, so be it.

In the light of O’Brien’s “spectacular climbdown” and the prospect of his unmentionables now being put on display in the Dáil, he needed some sort of fig-leaf to spare his blushes yesterday.

So he is going to sue the State to test the tension between the judiciary and the Oireachtas and seek to establish the correct demarcation between the role of the courts and Leinster House.

“But that’s not for now, judge,” said Michael Cush.

We are most grateful.