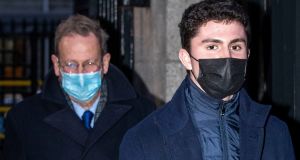 The Minister for Education breached commitments to keep the 2020 Leaving Certificate fair and accurate, and comparable to other years results, in failing to include historical school data in the calculated grade process, the High Court has been told.

The claim was made at the opening of the hearing before Mr Justice Charles Meenan of the lead challenge by a Leaving Cert student against the calculated grades process and awarding of college places for 2020. Some 50 other cases are on hold pending the outcome of the case by Freddie Sherry, a Leaving Cert student at Dublin’s Belvedere College.

On Tuesday, Feichín McDonagh SC, for Mr Sherry, said the Minister had “jettisoned” her commitment to keep the process of estimating grades fair by opting not to include historical data about schools ’ past performances as part of the process.

The Minister’s decision resulted in inflated grades and breached a second commitment to making the 2020 results comparable to those in past and future years, counsel said.

The process adopted by the Minister, after the decision not to run the Leaving Certificate examinations in 2020, was not panicked or rushed and expert opinion was obtained as to the best way to fairly and accurately assess calculated grades, he said.

Following a “top-down intervention” by the Minister, it was decided not to include historical school data but there was no requirement to exclude that data as part of the grade assessment process, counsel said.

Prior to the intervention, the system had factored in how to grade good students capable of getting the top grades but attending schools whose students had not performed well in previous years’ examinations, he said.

The system being used to calculate grades in Ireland was also different to those in the UK where there had been widespread criticism after thousands of results were marked down to reduce grade inflation, he said. A certain “opacity” regarding the reasons why the Minister decided, on August 21st last, to intervene in relation to the use of historical school data would be addressed during cross-examination of witnesses for the Minister, counsel said.

The situation created by the Minister was a “scrambled egg of complex proportions”. Expert data showed the matter should be “scrambled differently before the Minister took out her whisk.”

In his action, Mr Sherry, of Newtown, Celbridge, Co Kildare, claims a direction by the Minister last August to remove school historical records in the calculated grades process resulted in him being unfairly downgraded by 55 points.

Represented by Mr McDonagh SC, with Micheál P O’Higgins SC and Brendan Hennessy BL, instructed by Ferrys Solicitors, he says he was hugely disappointed when his teachers’ estimated CAO points total of 542 for him was reduced to 487 under the process and he missed out on his first course choice, pharmacy in TCD.

He claims the Minister’s direction, approved by the Government, interfered in the calculated grades process overseen by an independent steering committee was “unlawful”.

The Minister and State, represented by Eileen Barrington SC and Brian Kennedy SC deny the claims and maintain there is no reason to believe Mr Sherry would be in an improved position if historical school data was included.

They say students in Belvedere College received, on average, higher scores in 2020 compared to the 2017-19 period and there is no basis for any assertion Mr Sherry would have been treated more favourably in another category of school. Because the calculated grades process has been completed and CAO offers issued, any attempt to reinstate school historical data would be inappropriate or disproportionate as it would cast doubt on the results of significant numbers of students and their entitlement to college places, they argue.

The hearing is expected to last for two weeks.