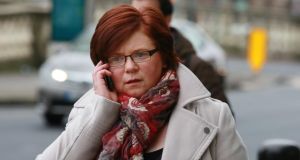 Marie Farrell at the Four Courts during the fifth week of a High Court action taken by Ian Bailey. Photograph: Collins.

Marie Farrell has told a High Court jury she decided to leave her home in Schull in early 2006 because of Garda intimidation of her children and life becoming “undescribable”.

“My children were being punished because I was no longer prepared to toe the Garda line,” she said.

Ms Farrell became upset when saying Garda Anthony Finn had called one of her sons a “bastard”.

After she made a complaint, Garda Finn called to her home with another Garda and apologised and said it would not happen again, she said.

Another of her children talked of “jumping off the rocks into the sea” due to what was happening, she said.

She said she had gone to Frank Buttimer, solicitor for journalist Ian Bailey, in March 2005 saying she had made false claims against his client. This led to a letter being sent to the Minister for Justice and a lot of media attention and life became “undescribable”, she said.

She had contacted Mr Buttimer saying she had made false statements against Mr Bailey, including she saw him about 2am on December 23rd, 1996 near Schull, hours before the body of French film-maker Sophie Toscan du Plantier was found.

Ms Farrell said she met Mr Buttimer two or three times and met Mr Bailey once briefly “just to apologise to him” in Mr Buttimer’s office in September 2005. She also received a letter from Mr Buttimer thanking her and stating Mr Bailey had no interest in taking a case against her.

Ms Farrell also said Detective Garda Jim Fitzgerald rang her saying he knew she was in contact with Mr Buttimer and had asked her to keep him, Det Fitzgerald, “out of it”.  Det Fitzgerald had said if she did so, he would sort out a summons related to one of her children, she said.

She said “attitudes towards us changed, definitely the attitude of the gardaí changed”.

Becoming upset, she said their children had had a great life in Schull, their friends were there, but that all changed and her husband had said they had “no choice but to get out of here”.

Ms Farrell said she and her husband decided to put their house on the market in January 2006. In March 2006, while at a hospital with her daughter, she met Det Fitzgerald on crutches who asked her: “Jesus, did you ever think it would end up like this?”

He said he was told to clear his locker “of anything that might link him to me”, she said.

He also told her it will “probably all end in a tribunal but sure when it’s all over, we’ll have a drink”, she said. This was “all very strange”.

Their house sold in June 2006 at a “huge financial loss”.

Ms Farrell completed her direct evidence yesterday in the civil action by Mr Bailey against the Garda Commissioner and State arising from the conduct of the investigation into the murder of Ms Toscan du Plantier. The defendants deny all of Mr Bailey’s claims, including of wrongful arrest and conspiracy.

The jury heard yesterday the case will run to at least the end of January, with about six more days of Mr Bailey’s witnesses and about 30-40 witnesses for the State.

After being told two jurors had commitments in late January/early February, Mr Justice John Hedigan said he would discuss that later but asked them to bear in mind this “is a truly major case with issues of huge national importance”.

Under cross-examination by Paul O’Higgins SC, Ms Farrell denied his suggestion gardaí had not given her a VHS tape featuring Mr Bailey reciting poetry at the Christmas Day swim in Schull for her to watch to see if she recognised anyone on that as the man she saw at 2am near Schull on December 23rd 1996. “There was definitely a tape.”

She agreed she rang gardaí on a confidential line under the name Fiona from phone boxes on two occasions to tell them about seeing the man at 2am. She said she wanted to be anonymous because her husband did not known she was out that night with a male friend.

She agreed she made a third call as Fiona from her home near Schull but disagreed she must have known that would be traced. Her number was exdirectory and she hoped it would not be traced. The “last thing I wanted was to be out in the public, I wanted my nice quiet family life”, she said. “Do you think I wanted to be thrown into this?”