‘I feel free and today my life begins,’ says Connor Corroon with aid of eye-gaze technology 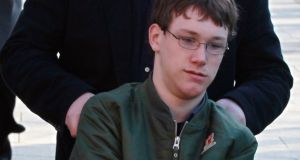 Using his special computer on Monday, when asked what he thought of the final settlement. Connor Corroon said, ‘I am happy with that’. In a statement later he said: ‘I am proud that for the first time ever I was able to speak in public and let people know what I wanted to convey rather than others guessing what I was thinking. The experience has been so liberating.’ File photograph: Collins Courts

A 24-year-old man with cerebral palsy who had sued over the circumstances of his birth at a Cork hospital has settled his High Court action with a final lump sum payment of €17.5 million.

This brings to €21.75 million the total paid to Connor Corroon, who cannot walk unaided, uses a wheelchair and can speak only with the help of special eye-gaze technology.

The approval of the final lump sum payment – one of the highest in the State – brings to an end a 17-year legal battle by the Corroon family from Mallow, Co Cork.

The settlement was reached after mediation talks spanning a week.

Connor, who has dyskinetic cerebral palsy spoke in court for the first time last week with the aid of eye-gaze new technology purchased after the payout from previous interim payments approved by the court.

Using his special computer on Monday, when asked what he thought of the final settlement. Connor said “I am happy with that.”

In a statement later he added: “I am proud that for the first time ever I was able to speak in public and let people know what I wanted to convey rather than others guessing what I was thinking. The experience has been so liberating.”

Outside court, Connor Corroon, with his eye-gaze technology, added: “Today represents the end of 17 long years. I feel free and today my life begins.”

Connor’s case was the first to be adjourned on an interim basis nine years ago as the legislation allowing for annual periodic payments in such cases involving the catastrophically injured was awaited. His mother Jude pleaded with the court to allow a lump sum payment so the family could get on with their lives and away from the “fishbowl life” as Connor endured assessments by different experts in advance of regular court appearances.

His legal team, instructed by Cantillon Solicitors, Cork had gone to court last week for a final lump sum settlement, arguing that expert advice was that due to indexation the annual periodic payment provided for in the new legislation “will get more and more insufficient over time”.

The Corroons’ counsel David Holland SC said the family has also found the “burden of coming to court intolerable and horribly intrusive”.

Connor of Copstown, Mallow, Co Cork, the High Court previously heard, suffered catastrophic injuries when he was born at City General Hospital, Cork, in 1995 and is permanently disabled, cannot speak and will require care for the rest of his life.

Connor, through his mother Jude Mary Corroon, Copstown, Mallow, Co Cork, had sued City General Hospital of Infirmary Road, Cork, over the circumstances of Connor’s birth on February 6th, 1995. Liability was conceded and the case was before the court for assessment of damages only.

In the High Court on Monday, David Holland SC told Mr Justice Kevin Cross there was “a fatal flaw” in the indexation provision relating to the periodic payment orders which he said “won’t be corrected by any review and as a result the family wanted the final once-off lump sum settlement”.

Approving the settlement, Mr Justice Kevin Cross paid tribute to Connor and his family and said “they are a credit to this country.”

The judge said it was a good settlement. Connor, he said is a wonderful young man “who has overcome his disability and is bettering himself to proceed to study at degree level”.

Mr Justice Cross added the funds would be for Connor’s care for the rest of his life and not “ a gravy train”.