Man settles action against HSE over loss of voice box 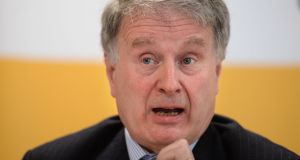 A man who sued after his voice box was removed during what the High Court was told was a “completely over the top” operation has settled his action. The Mid-Western Regional Hospital, Limerick, had previously apologised at the court to Kevin McMahon, who has no natural voice and can only speak through an artificial voice box.

Mr McMahon (63), Glasgow Park, Roxboro, Limerick, had sued the HSE over his diagnosis, treatment, management and care and, in particular, an operation where his larynx was removed at the hospital in January 2011.

He had also sued over a three-month delay in performing a second biopsy of his vocal cord. The second biopsy was ordered by a surgeon and was supposed to be carried out in October 2010 but was cancelled and rescheduled for January 2011.

He also alleged failure to discuss treatment options available before carrying out radical head and neck surgery when, it was alleged, it was unreasonable and inappropriate to do so. Liability had been admitted in the case and it was before the court for assessment of damages only.

On Tuesday, the sixth day of the hearing, Liam Reidy SC, for Mr McMahon, told Mr Justice Kevin Cross the case had been settled.

Earlier this month, the hospital extended sincere apologies for the delay in treatment and the resulting consequences for Mr McMahon.

The court heard that when Mr McMahon, a father of four and a truck driver, first attended the hospital in 2010, he had a throat lesion which was in the first level of cancer. His lawyers argued that targeted radiotherapy would have cured him and the operation to remove his voice box in January 2011, when it was believed his cancer had reached the third level,was “completely over the top” and “too radical”. Experts for Mr McMahon believed the cancer could have been treated with a combination of chemotherapy and radiotherapy.

Earlier this month, the hospital extended sincere apologies for the delay in treatment and the resulting consequences for Mr McMahon.