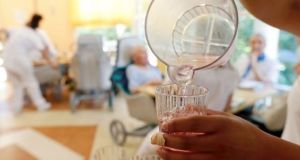 High Court president Mr Justice Peter Kelly said he preferred the evidence of the medical experts who were of the view the man was of unsound mind. File photograph: Regis Duvignau/Reuters

A man in his mid sixties, with severe life long epilepsy and organic brain disease, who last week pleaded with a High Court judge to allow him out of a nursing home will have to stay there for the time being.

In a ruling on Tuesday High Court President, Mr Justice Peter Kelly, who visited the nursing home outside Dublin last week to hear the man’s evidence first hand, said he would make him a ward of court.

The man, who has been in the nursing home for several months, was opposing a HSE application to have him made a ward of court.

He had told one doctor he understood a seizure could kill him but would rather be happy at home, where he could visit his mother’s grave, than safe in the nursing home.

In a reserved judgment, Mr Justice Kelly said that during a two hour hearing in the nursing home, and in a number of hearings prior to that, the court had heard what he described as “a clash of medical evidence” regarding the man’s capacity to look after himself.

Mr Justice Kelly said that because of this, while taking the man into wardship, the court would be open to new medical and psychiatric assessments being made in six or twelve months time to review its decision.

“As I have often stated in this court I believe people should not be in wardship unless they absolutely have to be,” the judge said.

The court appointed the general solicitor for minors and wards to act as the man’s committee which will be responsible for following court approved guidelines with regard to the man’s treatment and financial affairs.

He will, pending further court order, remain resident in the nursing home where Mr Justice Kelly heard his arguments for being released to his home where he lived alone. The matter was put on the High Court wardship list for October 15th.

Judge Kelly took the unusual decision to hear the man’s appeal in the nursing home after having been told by the man’s treating doctor that the stress of court proceedings in a formal setting could trigger a seizure.

The visiting court had heard conflicting views about whether the man had the necessary mental capacity to make decisions affecting his health and finances. A treating consultant geriatrician and court-appointed medical visitor, who is also a consultant psychiatrist, said that the man lacked capacity.

Two consultant geriatricians who assessed him in May disagreed and believed he had the necessary capacity.

The court heard that the man had been admitted to hospital multiple times and had become malnourished when living alone at home. He bought ready made meals from a local store and heated them in his microwave.

The man, who said he was a supporter of Spurs, enjoyed visits to his local town and liked visiting the grave of his mother with whom he lived up until her death.

Mr Justice Kelly said there were three questions he had to answer: Is the appellant of sound mind; is he incapable of managing his own affairs and is it necessary and appropriate for him to be taken into wardship. He preferred the evidence of the medical experts who were of the view the man was of unsound mind.

SAGE, the Support and Advocacy Service, issued a statement after the judge’s decision in which it expressed deep disappointment that one of its clients who had resisted wardship in order to live in the place of his choice had lost his legal identity, his rights as a citizen and his ability to choose where he lived based on legislation dating from 1871.