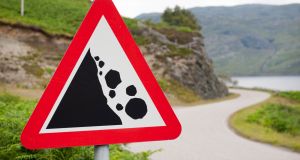 A Co Dublin man has brought proceedings aimed at compelling his neighbour to take steps to prevent rock slides and boulders damaging his property.

Mr Kelly owns a 36 square metre embankment of land located at the rear of Mr Lynam’s property, the court was told. The embankment is seven to eight metres high, vertical in places and made up of soil and rock.

In a sworn statement, Mr Lynam said there has always been some rockfall from the embankment but the amount of falling debris has intensified in recent months.

A 100kg boulder fell from the embankment last May and landed in his back garden where it damaged decking, he said.

If the erosion of the embankment continues, his property and that of other neighbours will become increasingly hazardous, Mr Lynam claims.

Somebody might be killed or injured by a rock fall or the collapse of the embankment, he claims.

He claims Mr Kelly has refused his requests to desist from using the water system or clearing vegetation on the land above the emabnkment.

On Wednesday, Mr Justice Paul Gilligan granted Mr Kennedy’s ex parte application (one side only represented) for permission to serve short notice of the injunction proceedings on Mr Kelly.

The judge, who said he did not want to grant an injunction in the absence of the other side, adjourned the matter for a week.

In that action, not yet heard, Mr Kelly alleges he purchased a parcel of land situated at the rear of Mr Lynam’s property.

Mr Kelly claims Mr Lynam erected decking and a fence over what Mr Kelly says is his land without his permission.

Mr Lynam pleads he has been in adverse possession of the land at all material times since 2003 and in a counterclaim wants a declaration he is entitled to be registered as proprietor of the land in question.