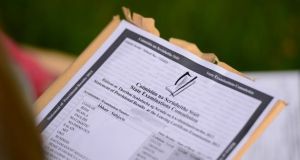 In his action, the 18-year-old claims exclusion of home school students from the Leaving Cert calculated grades process breaches his rights under the Constitution.

An urgent hearing will be held next month of a High Court action by a home-schooled Leaving Cert student aimed at having his application for calculated grades considered by the Department of Education.

After Mr Justice Charles Meenan was told on Wednesday the Minister for Education conceded Elijah Burke was entitled to leave to bring his judicial review proceedings, the judge fixed the case for hearing on August 12th and 13th.

Joseph O’Sullivan BL, for the Minister for Education, said very comprehensive issues arose concerning the calculated grades process, which represented an effort to maintain fairness and integrity in the system.

Mr Justice Meenan agreed with both sides the matter is most urgent for reasons including the Leaving Cert grades will be issued on September 7th.

Brendan Hennessy BL, instructed by solicitor Eileen McCabe, for the student, also indicated either side may appeal the outcome.

After the judge voiced concern that a proposed August 24th hearing date left little time for delivery of judgment, August 12th was fixed for the opening of what he was told would be a two day hearing.

Mr Justice Meenan said it was likely he would be the trial judge but that was not fully decided.

In his action, Elijah claims exclusion of home school students from the calculated grades process breaches his rights under the Constitution, including to be educated in the home. He also claims breach of his rights under the Education (Welfare) Act 2000, and that his exclusion is arbitrary, unfair, discriminatory and unreasonable.

Unless the court intervenes, he says he cannot progress to third level education for another year.

From Cloonsunna, Castlebar, Co Mayo, the 18-year-old is one of ten siblings who have all been educated at home by their mother, a registered teacher who has also worked as an examiner for the State Examinations Commission.

It is claimed Mrs Burke contacted the Minister’s office directly, and the calculated grades executive office, several times seeking to have him considered for a calculated grade but no firm reply was received.

On Wednesday, the court was told a decision received that day from the Minister did not affect the proceedings.

In an affidavit, Elijah said he has studied diligently for the Leaving Cert, is registered to sit the exam in nine higher level subjects and hopes to attend NUI Galway to study Biomedical Science or History with Music.

The points for those courses were 533 and 318 respectively in 2019 and he expected to get well above that based on his past performance in mock exams, he said. He has completed all grades in classical piano, has had much success in music competitions, and, with his brother Simeon also won the Mayo Association Dublin debating competition in 2017.

Eight of his siblings have averaged points in the Leaving Cert of 520 and all later obtained first class honours degrees in various fields. Two have postgraduate degrees and one is graduating with a PhD this year.

In his action, Elijah wants various orders and declarations, including quashing parts of the calculated grades scheme imposing a “blanket” exclusion on parents acting as tutors for home schooled children.

It is claimed the Minister acted unlawfully in failing to have in place a process for receiving and determining applications for calculated grades for home schooled pupils.

Having sat his mock exams at home and with a significant body of course work as part of his Leaving Cert studies, Elijah has the same amount of “credible evidence” available to him as any other student in school, it is claimed.