A settlement has been reached in the action by former Catholic Archbishop Richard Burke who alleged he was wrongly depicted as a paedophile in the RTÉ Prime Time Investigates: Mission to Prey programme. Video: Ronan McGreevy 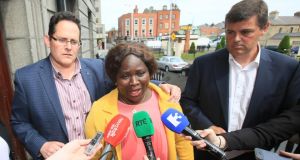 Dolores Atwood, with her husband Chris (left) and RTÉ’s Kevin Bakhurst (right), speaking to the media on leaving the Four Courts on Thursday, July 2nd, 2015, after the announcement of a settlement in a High Court action for damages taken by former Archbishop of Benin, Richard Burke. Photograph: Collins Courts

The parties had announced a settlement. As court 25 emptied out, Dolores Atwood stood with her devoted husband’s arm around her, looking confused and distressed, and began to weep.

RTÉ’s head of news, Kevin Bakhurst; managing editor of current affairs, television, David Nally; and the broadcaster’s solicitor, Patricia Harrington, formed a sympathetic circle around her, attempting to make some kind of sense for her of what had just happened.

Outside, Robert Dore, solicitor for Richard Burke, Archbishop Emeritus of Benin – as he is still known, though out of ministry – leaned against the court railing overlooking Chancery Park, waiting for members of the Burke party to emerge, as word spread that the settlement hadn’t yielded a cent in damages for his client.

Burke had claimed that he was branded a paedophile on RTÉ’s Mission to Prey programme. The case hinged on whether his sexual relationship with Atwood had begun when she was 14 as she claimed, or 20, as he claimed.

After 45 minutes of to-ing and fro-ing yesterday morning, the eight-day hearing before a conspicuously young jury of six men and six women ended with a simple apology from RTÉ for stating incorrectly in the programme that Mr Burke had declined to be interviewed.

It acknowledged he had “consistently and vehemently” denied the allegations. It also said that Dolores Atwood – whom it considered to be a “truthful and honourable person” – was standing over her allegations.

Burke’s sister Joanne, who accompanied him to court every day, was at his side again yesterday. Their brother was at home farming, she said.

Burke, from Clonmel, Co Tipperary, was described as very close to his brother and sister. The boy who joined the missionary Kiltegan Fathers at 17 has been described in correspondence as a vulnerable man, living alone outside London since 2011, surviving on social welfare.

Yesterday, brother and sister stood together as Robert Dore repeated the line about his client’s “consistent and vehement” denial of the allegations.

He was a truthful person and the action, he said, had been “compromised [sic] to [Burke’s] satisfaction” and he had “no exposure to costs”. RTÉ, meanwhile, mentioned only a “contribution” to Burke’s costs.

Had truth been served?

To Atwood, now 45, the abrupt settlement meant she has been denied her day in court. Though not a party to the action, as a key witness for RTÉ she had travelled from Canada to state her truth.

Her 30 minutes or so in the witness box was barely enough time to describe life as the vulnerable 13-year-old child of a large, unhappy Muslim family in Nigeria in 1982, who through her fascination with the crucifix came into contact with the kindly, caring Catholic priest – the same priest she claimed sexually molested her a year later while she was in hospital with typhoid fever.

Then it collapsed into legal objections from his lawyers, agitated by allegations of early sexual contact, over whether Burke should have been given an opportunity to contest this in his evidence, though he declined an offer to return to the stand. And there the evidence ended.

But for good or ill, Richard Burke had already had three and a half days to state his truth.

During evidence, Atwood’s husband Chris, a former aid worker whom she married in 1995, leaned in close with his arm around her, often stroking her back, as Burke – whose prayerful hand gestures and appeals “before God and man” gave no hint that he was out of ministry - painted a picture of a “very sexually experienced” young woman who had preyed obsessively on him for over 20 years, a rational, clear-thinking, adulterous manipulator and blackmailer, with whom he went to Mass in the Pro-Cathedral when she landed in Dublin and demanded to see him.

But not for the first time around the Four Courts, it was noted how defamation cases have the potential to rebound on the plaintiff.

This one exposed much about Burke’s extensive sexual activities in Nigeria, as a priest and an archbishop, including the fact he had “embraced and improperly touched” Atwood’s younger sister, had slept with Atwood during much of her 20-year marriage, and couldn’t recall if “one single incident” with a married Nigerian mother-of-eight was before or after his relationship with Atwood.

When it was put to him that, in fact, he had had experiences with “quite a lot” of other people, Burke replied “some other people”.

Counsel suggested the number of people was “in the teens” – adding he was referring to the number of those involved, and not their age.

But it was the detail of the continuing relationship between Burke and Atwood – much of it recorded by her husband, Chris, in phone calls to Burke in 2007 - that provided the most striking evidence.

They revealed a profoundly distressed husband, aware his wife has been obsessed with another man for 25 years.

In one such call, he accused Burke of creating an individual who “does not know what a healthy, loving relationship is. The passion Dolores has for you, you created it, you created a monster.”

When he found airline tickets in the name of Burke and his wife, he confronted her and she got angry. “I struck her and the police came and I have a record. When I go to bed at night, I don’t want to feel what I do is rape . . . Are you happy you destroyed Dolores?”

It also emerged in evidence – though not in the RTÉ programme - that Burke had made what he claimed were four different payments totalling about €176,000 to Atwood, claiming she had him terrorised with threats to expose their relationship.

He described phone calls from her in 2007 that were “menacing, threatening, aggressive, abusive and demanding” and recorded one in which she had given him four options, demanding full and total intimacy, or €10,000 a year for five years, a “discussion”, or to restore things to how they used to be.

In court, he angrily denied he had taken the action – lodged shortly after Fr Kevin Reynolds won his defamation case – for money.

He said he had only later become aware of a procedure under the Defamation Act whereby plaintiffs could seek a declaration that they had been defamed, which would not involve money.

In a quest for truth and nothing else, the full evidence of Dolores Atwood would have been heard and cross-examined.

In a settlement, there is vindication for no one.