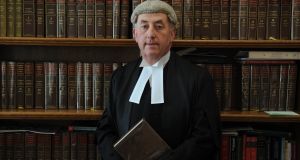 Mr Justice Peter Kelly said it would be “disastrous” if those orders lapsed after Brexit, he said. Photograph: Aidan Crawley

A “deeply vulnerable” young woman, with a traumatic history and considered a “very serious” risk to identified persons and certain “categories” of people, is to remain in secure care detention on foot of High Court orders.

The orders were sought pending proceedings aimed at having the woman, who is also subject of criminal proceedings in the District Court, being made an adult ward of court.

During the application on Monday, High Court president Mr Justice Peter Kelly said he wanted clarity from the HSE as to what is to happen, post-Brexit on January 31st, to adult and minor wards of the Irish court placed in the UK.

It would be “disastrous” if those orders lapsed after Brexit, he said. Barry O’Donnell SC said he understood there was a mechanism for the placement orders to continue in force post Brexit but he would seek further clarification.

Mr O’Donnell last month obtained various orders on behalf of the Child and Family Agency to continue the girl’s secure detention beyond her 18th birthday, which she marked recently, and pending the outcome of the wardship proceedings.

On Monday, Mr Justice Kelly was updated on the woman’s position. He was told the woman and her court-appointed guardian were separately represented because her view about what is in her best interests are “diametrically opposed” to the guardian’s. Mr O’Donnell said his side wanted to speed up steps for a possible placement in a specialised UK unit and was concerned the UK unit had said that might take six months if she was considered suitable. Contingency plans are in place if that occurs and alternative placements are being explored, he said.

Counsel for the woman said he was instructed to seek an extension of time to lodge her objection to wardship. Mr Justice Kelly granted that extension and also directed that a medical visitor’s report, addressing issues of the woman’s capacity, be provided to another psychiatrist asked by the woman to prepare a report for the purpose of that objection. Gerard Durcan SC, for the guardian, said his client considered the detention orders should be continued in the woman’s best interests.

The judge also heard the woman objects to her mother continuing to have any involvement in the case but Michael Lynn SC, for the mother, said she is very anxious to remain involved. That matter will be addressed later.

In his ruling, the judge said he considered the special care detention is in the woman’s best interests and he continued that pending the matter returning to court in three weeks. He previously directed a medical visitor to assess the girl’s capacity after being told one psychiatric report had suggested her various disorders suggested a fluctuating capacity but two other psychiatrists were strongly of the view she lacks capacity.

The wardship petition referred to disorders including a reactive attachment disorder and a sexual sadism disorder, the judge noted. It was considered she would need to be placed in a UK specialist unit as her complex case exceeds anything the services here have come across.

The judge was previously told the woman presents an “immediate and very serious risk” to certain people and to particular categories of people. There is a prior history of assault and sexual violence and an incident last year had led to her admission to special care.

She had described her intentions and a large knife was found, the court heard. She had also set out in a manuscript a plan to kill and mutilate someone which, the court was told, was not treated as a “fantasy” but a “definite” threat. She also talked about wanting to go to college and pursue a career, reflecting a form of deep-seated disordered thinking.