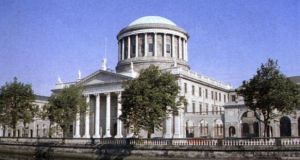 Ktech Security secured an injunction preventing several activists or anyone with notice of the order coming within 2km of the hotel while the award ceremony is taking place. The activists, who deny any wrongdoing, may appeal the ruling.

Seeking the orders Robert Beatty BL, for Ktech, said the protest was part of an ongoing campaign of threats and intimidation, in particular on social media, against Ktech by individuals who have issues with its alleged involvement and conduct in evictions.

The activists are involved in various organisations, including “The Land League” “The Hub” and “The Anti-Eviction Group”, he said.

Because of the alleged campaign, Ktech has brought proceedings seeking damages against the activists, whom it alleges are trying to damage its business and reputation and have defamed it.

As part of those proceedings, it sought injunctions, including preventing them protesting at the ceremony or at Ktech’s Dublin headquarters.

The activists, including businessman Jerry Beades and Tom Darcy, a candidate in last year’s European Parliament Elections for Direct Democracy Ireland, opposed the application and denied all the allegations.

The activists say they have a right to peaceful protest against alleged conduct of Ktech, particularly during evictions.

They argued the company’s application amounted to a breach of their constitutional rights, including to freedom of assembly and expression. Mr Darcy said he acted peacefully at all times and the claims were an attack on his honour and reputation.

Following submissions, Mr Justice Paul Gilligan granted Ktech injunctions against several individuals whom it alleges are involved in anti-eviction groups, and any other person with notice of the order, restraining their attendance at the award ceremony for the purpose of protesting against Ktech.

The judge also granted injunctions, to remain in place pending the outcome of the full hearing, restraining the respondents protesting at Ktech’s offices in Walkinstown or attending at the homes of Ktech’s employees or directors.

The judge also said he had to take account of language used on social media posts and noted evidence of incidents before Christmas when activists held a protest outside the home of a receiver whom Ktech had provided services for. At that protest the managing director of Ktech, Kevin McGarry had said he was handed a funeral wreath by activists.

Noting the conflict between the parties, the judge directed the case be “fast tracked” so a full hearing can take place as soon as possible.

He dismissed an application by Mr Beades for a freezing order preventing all Ktech’s employees removing pictures of individuals wearing balaclavas and holding machine guns which, he claimed, had been posted on Facebook.

The images were on the Facebook pages of individuals and not on any Facebook pages connected to Ktech and he could not grant the order sought, he said.

In an affidavit, Ktech’s managing director denied the firm has engaged in violent or unprofessional behaviour as alleged on social media by anti eviction groups. He denied further claims made on line that the company has been involved in “violent evictions of families from their homes or farms.”