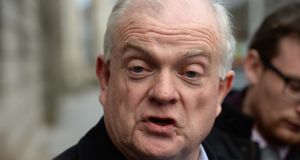 Businessman and anti-eviction activist Jerry Beades has not made repayments on €2m worth of mortgages on two properties in Dublin for a decade, the High Court has been told.

Mr Beades has opposed an application by his lender, IIB Homeloans Ltd seeking to execute possession orders in respect of two Dublin properties owned by him.

It is alleged Mr Beades borrowed €1.3 million in 2003 from IIB Homeloans Ltd which was secured on the properties at Richmond Avenue, Fairview, and Little Mary Street, Dublin 1.

Michael O’Sullivan BL, for the lender, told Ms Justice Caroline Costello on Thursday no repayments have been made on the properties for 10 years and some €2.1 million remains outstanding on the loans.

The lender secured possession orders in respect of the properties from the High Court in 2008. The orders were appealed to the Supreme Court which, in 2014, affirmed the High Court’s decision.

The lender did not take possession of the properties in 2015 because of concerns it had with the execution of the order, and the effects it would have on those renting the properties.

The matter, the lender claims, was put on hold in the hope that Mr Beades would engage with it but it claims there was no engagement and no proposals from Mr Beades.

In its application to the High Court, the lender now seeks orders for the execution of the possession order in respect of the properties and permission to change the title of the plaintiff from IIB Homeloans Limited to KBC Bank Ireland Limited.

Counsel said it is accepted KBC and IIB Homeloans are separate companies and he submitted IIB’s assets and those of KBC were not the same. His client’s case was the orders sought by the lender are not among the category of orders that can be assigned from one entity to another, he said.

It is also claimed that there was a delay by the lender in seeking the orders.

In reply, Mr O’Sullivan said KBC is the new name of IIB and is entitled to the orders sought.

Both properties have been rented to tenants but no rental proceeds from them have been used to reduce the indebtedness and the lender would be prejudiced if the orders are not granted, he said.

Following the conclusion of submissions from the parties, the judge said she was reserving judgment in the matter.

The judge did not say when she will give her decision.