Ian Bailey sets out his objections to being extradited to France 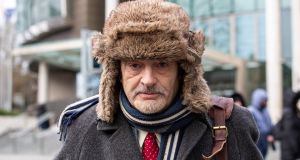 Lawyers for the Minister for Justice require time to consider Ian Bailey’s objections to being extradited to France for the murder of filmmaker Sophie Toscan du Plantier, the High Court has been told.

It is the third time French authorities have sought Mr Bailey’s surrender in relation to the death of Ms du Plantier, whose badly beaten body was found outside her holiday home in Schull, Co Cork in December 1996.

The 62-year-old Englishman, with an address at The Prairie, Liscaha, Schull, west Cork, was convicted of the Frenchwoman’s murder in his absence in a Paris court last summer. The three-judge Cour d’Assises in Paris accordingly imposed a 25-year prison sentence on him in his absence.

Mr Bailey, who denies any involvement in Ms du Plantier’s death, was arrested on foot of a European Arrest Warrant in December. He did not attend the French court and had no legal representation in the proceedings, which he has described as a “farce”.

Counsel for Mr Bailey, Ronan Munro SC, told the High Court on Monday that his client had recently sworn an affidavit setting out his objections to being surrendered.

Mr Munro said the affidavit raised certain factual matters, particularly in relation to Mr Bailey’s health, which lawyers for the Minister for Justice required time to consider. He assured Mr Justice Donald Binchy that progress was being made in the case.

Mr Bailey was remanded on continuing bail to February 24th next, when a date for hearing is expected to be fixed.