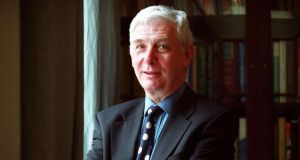 Given the disputes between the lawyers in the Ian Bailey case, a dry run of the evidence of former Director of Public Prosecutions Jim Hamilton (above) was heard in the absence of the jury to determine what he could say before them. File photograph: Alan Betson/The Irish Times

Mr Barnes also considered it prejudiced while Mr Hamilton described it as having many shortcomings. Robert Sheehan, the DPP official who dealt with the Garda file, demolished the case against Ian Bailey in a 44 page memo. The jury heard none of that evidence, as it was ruled inadmissible opinion.

A crucial element of Mr Bailey’s case was his claim that gardaí conspired to manufacture evidence against him and thus have him charged with murder by unlawful means.

A flawed investigation is not unlawful, but manufactured evidence and political pressure is.

A key element of this claim was evidence from Malachy Boohig, State Solicitor for west Cork. He said he was asked to go to Bandon Garda station in March 1998 where senior gardaí, including Chief Supt Sean Camon, Sgt Liam Hogan and Chief Supt Dermot Dwyer, urged him to get the DPP to charge Mr Bailey with murder.

Mr Boohig also said Chief Supt Camon later told him he understood Mr Boohig and then minister for justice John O’Donoghue were in college together, and asked would he get the Minister to get the DPP to charge Mr Bailey.

Mr Boohig refused and reported the Bandon encounter to then DPP Eamonn Barnes, who later made a memo of what Mr Boohig told him.

After learning in 2011 the French were seeking Mr Bailey’s extradition on foot of the Garda file, Mr Barnes told his successor Mr Hamilton about the Bandon encounter, and he immediately contacted the Attorney General.

All this led to Mr Bailey’s lawyers finding out for the first time from the Attorney General, weeks before his Supreme Court appeal against his extradition, about the Bandon events and the existence of the highly critical analysis of the Garda investigation written by Mr Sheehan.

The Sheehan memo, including a suggestion that gardaí gave drugs to Martin Graham as an incentive to implicate Mr Bailey, was ruled inadmissible on grounds it was his “opinion” of the investigation.

The jury had to make up its own mind about the conduct of the investigation, the judge ruled.

For the same reason, he ruled inadmissible a two-page European Arrest Warrant document from the French authorities because it contained opinion prejudicial to Mr Bailey.

The Bailey side argued the DPP witnesses were all independent professional persons entitled to give evidence of their concerns about the Garda investigation. Not permitting them do so created “an air of unreality”, and deprived the jury of crucial context, Tom Creed SC, for Mr Bailey, complained.

The jury, Mr Creed insisted, should know the context and reason why Mr Barnes was so concerned in 2011 that he emailed Mr Hamilton. This mattered because among Mr Bailey’s claims was that he faced extradition due to a flawed Garda inquiry, he argued.

Mr Justice Hedigan’s rulings meant that part of the October 2011 email from Mr Barnes to Mr Hamilton which included Mr Barnes’s opinion the investigation was “flawed” and “prejudiced” was not put before the jury.

Mr Sheehan was clearly frustrated by rulings limiting what he could say about his dealings with gardaí concerning the du Plantier file.

The file, he said, dated back to 1997, had thousands of pages of statements and he had no clear recollection of much of it, having been taken off the case in 2003.

He wanted to be allowed to refer to notes he had made about specific aspects of the file, insisting they accurately reflected the material, and all opinion was deleted from them.

The judge ruled only notes made contemporaneously could be referred to, Mr Sheehan could not refer to these notes and must give evidence from memory.

Mr Sheehan also ran into trouble when giving evidence to the jury about a consultation with gardaí in February 1997 where he said he made “abundantly clear” he viewed Marie Farrell’s evidence as “absolutely unreliable”.

She made a statement in December 1996 describing the man she saw as “average height and thin build” but, “lo and behold”, when the gardaí wanted Mr Bailey as a suspect, she changed that to say he was “a very big man...in fact, he was so big he was Mr Bailey”, Mr Sheehan said.

When he told the jury he found this evidence “unreliable” and “perverse”, the State objected to his phraseology.

The jury was sent out while lawyers argued over what Mr Sheehan could and could not say.

Insisting Marie Farrell’s reliability was central to their case, Mr Creed said the issue was not whether Mr Sheehan was correct to consider her totally unreliable, but that gardaí continued taking statements from her after Mr Sheehan raised his concerns.

Mr Sheehan was being “totally hamstrung” in what he could say, counsel complained.

The judge disagreed and said his rulings were “absolutely basic law”. Mr Sheehan, he said, was trying to “go far and wide” and his “lo and behold” remark was “totally inappropriate” for a public servant.

The State argued the Bailey side was inaccurately implying to the jury material was being unfairly withheld and complained the court’s rulings were not being properly respected.

All Mr Sheehan could say is he dealt with the file, got information, asked for more, got that or did not, and did not direct a charge of murder due to insufficient evidence but he was effectively trying to introduce his report when it had been ruled out, it was argued.

Shortly afterwards, arising from the decision Mr Sheehan could not refer to his notes, Mr Creed said there was nothing he could “usefully” ask Mr Sheehan, despite his having been the professional officer dealing with the file.

Given the disputes between the lawyers, a dry run of Jim Hamilton’s evidence was heard in the absence of the jury to determine what he could say before them.

Ultimately, Mr Hamilton was not permitted say he believed there were so many “shortcomings” in the Garda file he thought it necessary to send a very detailed memo to gardaí explaining the decision not to prosecute.

The jury did not hear Mr Hamilton’s evidence he was “slightly surprised” not to be contacted by the Attorney General’s office about the “unprecedented” French mutual assistance request; that the French never asked him for his reasons not to prosecute; that Mr Bailey was facing extradition with no information about the evidence against him which seemed “an unfair and invidious position to be in”, and that he told the AG of his concerns about a possible “miscarriage of justice” and “shortcomings” in the Garda investigation.

The State had argued Mr Hamilton should not be permitted to say there were “shortcomings” because that was an “extremely prejudicial” and “entirely vague” expression of opinion.

Mr Hamilton could only say the file never achieved the state where it had sufficient evidence, the judge ultimately ruled.

After all of the evidence in the case concluded, the judge ruled the claims concerning the Boohig incident were statute-barred.