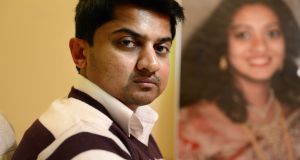 Praveen Halappanavar with a photograph of his wife Savita in the background. She died at Galway University Hospital on October 28th, 2012. Photo: Cyril Byrne/The Irish Times

Savita Halappanavar’s husband has settled his case against the HSE over her death in a Galway hospital in 2012.

Praveen Halappanavar settled the case for a substantial but undisclosed amount just days before a three-day hearing of the action was due to start in the High Court, according to sources.

The settlement, which is subject to a confidentiality agreement, will be announced in the court on Thursday.

The State Claims Agency, which handles medical negligence cases against hospitals or the HSE, declined to comment on the case.

A spokesman said it never commented on individual cases but he pointed out that 97 per cent of them were settled out of court.

Mr Halappanavar has not returned to Ireland for the High Court sitting.

The HSE is also understood to have made an out of court settlement with Akamahadevi and Andanappa Yalagi, Ms Halappanavar’s mother and father, in advance of the hearing today.

The family had sued the HSE and Galway University Hospital for negligence over her death on October 28th 2012.

Ms Halappanavar (31) had presented at the hospital a week earlier with severe back pain. She was 17 weeks pregnant and was found to be miscarrying. Her request for a termination was refused because the foetal heartbeat was still present.

She developed severe sepsis and went into septic shock after spontaneously delivering a female foetus three days after she was admitted. She died in intensive care at 1.09 am on October 28th.

The case reignited the abortion debate in Ireland and led to the passing a year later of the Protection of Life During Pregnancy Act, which provides for abortion where there is a real and substantial threat to the life of a pregnant woman or girl. It was commenced in January 2014.

The family’s soclicitor, Gerry O’Donnell, told The Irish Times in July 2013 that proceedings would be issued for medical negligence.

He said on Wednesday night the case would be “concluded” in the High Court on Thursday afternoon. Rulings on a number of matters remain to be made.

It is listed for hearing before Mr Justice Kevin Cross.