Teenager, who also has anorexia nervosa, said to be ‘almost mute’ due to depression 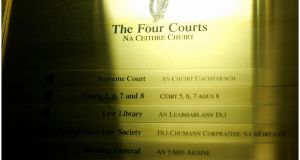 The HSE has asked the High Court for orders allowing doctors treat a teenage girl, said to have become ‘almost mute’ due to depression associated with an eating disorder, with electroconvulsive therapy (ECT). Photograph: Bryan O’Brien.

The HSE has asked the High Court for orders allowing doctors treat a teenage girl, said to have become “almost mute” due to depression associated with an eating disorder, with electroconvulsive therapy (ECT).

The President of the High Court, Mr Justice Peter Kelly, said he wanted to hear from the girl’s parents and treating consultant as part of the application by the HSE for permission to administer ECT.

The therapy involves an electric current being passed through the brain, or part of it, under anaesthetic.

The judge noted there may be some controversy around the use of ECT and said he may want to ask the consultant questions.

The court heard the girl was sent to a UK facility just over a year ago suffering from anorexia nervosa complicated by extreme depression.

While her weight has stabilised, her depression was such she “is now almost mute” and three consultants had used that expression to describe her, Peter Finlay SC, for the HSE, said.

As a result, it had been decided by her clinicians that she should be treated with ECT. Counsel said the HSE needs a court order permitting that to take place. There would then need to be an application to the UK courts seeking an order backing up the Irish order.

Unfortunately, before she was taken to the UK, her parents and clinicians had not consulted legally and as a result the need to make these applications had arisen. It was never intended by the HSE, just because a patient received treatment abroad, that their rights here would be lessened, counsel said.

While the Mental Health Act requires that an application for ECT for a minor must be approved by the courts here, that was not necessarily the case in the UK.

The UK clinicians had said they would support the treatment, counsel added.

A solicitor for the parents said they were anxious the application should be heard as soon as possible.

Mr Justice Kelly put the matter in for hearing on Wednesday.

1 US supreme court rules prosecutors can obtain Donald Trump’s financial records
2 Mother and five children sleeping in car while seeking accommodation
3 Six counties register no Covid-19 case over past week
4 Donald Trump is an amateur populist – the real trouble is yet to come
5 Covid-19: Small minority of pubs putting health of customers and staff ‘at risk’
Real news has value SUBSCRIBE