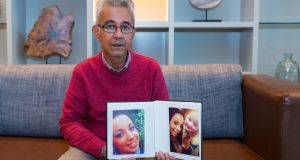 Natasha Perie’s father Peter holds a photograph of his daughter.

The family of a brain-dead pregnant mother-of-two who was kept on life support for almost four weeks due to concerns about the Eighth Amendment has received an apology from a hospital and the HSE at the High Court.

The apology is part of a settlement which also provides for various payments, including a €150,000 payment for Natasha Perie’s daughter who was “horrified” when, then aged six, she saw her mother in a deteriorating and near unrecognisable condition on life support in late 2014.

Her daughter, now aged 11, was described in a recent psychological assessment as a “sad child” who, when asked what would she ask for if she had three wishes, said: “I want my mam back.”

In approving the €150,000 settlement for Ms Perie’s daughter, Mr Justice Kevin Cross said the child had endured “a terrible time”.

He hoped, as she comes to adulthood, she would be comforted by good memories of her mother.

He said Ms Perie was kept alive due to what the High Court later decided was an erroneous view that there was some obligation to do so as a result of the Eighth Amendment.

The HSE earlier this year accepted liability concerning the main claim by members of the family - that Ms Perie’s death was caused by failure to diagnose a brain cyst which ruptured, leaving her brain-dead days after her admission to the Midland Regional Hospital Mullingar on November 27th, 2014, having complained of severe headaches on a number of occasions.

A mediation to assess damages for that will be held in January.

In an apology read to the court on Wednesday, Anita Brennan, general manager of the Mullingar hospital, said, on behalf of the HSE and the hospital, she wanted to offer “sincere and deepest sympathy on the tragic death of your much loved daughter Natasha”, and mother of two, while in the hospital’s care in December 2014.

They were clearly distressed as Denis McCullough SC, instructed by Gillian O’Connor of Michael Boylan Litigation, set out the effect on Ms Perie’s daughter of seeing her on life support and being present when the ventilator was switched off on December 27th, 2014.

Counsel said during this time, her daughter was brought to see her and was horrified at the condition her mother was in. She was taken there on the advice of a social worker.

Counsel said Natasha’s son, then only four, was less affected and a nervous shock claim was not brought on his behalf.

He said Natasha’s daughter was very close to her mother and, as a result of her death, had to leave the home she shared with her mother, half brother and grandfather and uncle and go and live with her father and half brother.

She was “unhappy for a long time and grieving very deeply”. She rated her own mood when assessed by a child psychiatrist as five out of ten and missed seeing her grandfather and other family members as often as she had previously.

Counsel outlined Ms Perie was at 15 weeks gestation when she was declared clinically brain dead on December 3rd, 2014 at a Dublin hospital as a result of a ruptured cerebral cyst suffered at the Mullingar hospital on November 29th, 2014, two days after admission.

She remained on life support after being formally declared brain dead on December 3rd, 2014 until the support was turned off on December 27th.

The delay arose from doctors’ concerns taking her off life support could breach the constitutional right to life of the unborn in the Eighth Amendment, repealed last year.

After a hearing in Christmas week 2014, a three-judge High Court ruled on December 26th the life support could be ended as the only prospect for the unborn was “distress and death”.

Maintaining support would deprive the woman of dignity in death and subject her family to “unimaginable distress in a futile exercise”, it also said.

Ms Perie, described as having a rotting brain with an open infected head wound, was buried afterwards in a closed coffin.

In a statement on behalf of the family after the hearing, Peter Perie said he wanted “to express how traumatic and heart-breaking my daughter’s death has been for all of the family”, but especially her children.

“Five years ago, my beautiful daughter Natasha was admitted to Mullingar general hospital suffering from severe headaches and was misdiagnosed as suffering from morning sickness. She was a 26-year-old pregnant young girl. Sadly, Natasha never came home. She died as a result of a large cerebral cyst that went undiagnosed while in hospital.”

“What followed was nothing short of a nightmare,” he said.

He said this was the family’s third encounter with the legal system as five years ago, they fought to have somatic care withdrawn “to allow my daughter and her unborn baby a dignified funeral and burial”.

Instead, we faced Christmas Eve and St Stephen’s Day in court,” he said. Now, for Natasha’s two children, Christmas “is forever associated with the loss of their beloved mum.”

“Whilst most of the media acted in a respectful way, we endured a torrent of abuse on social media,” he added.

He said their second legal outing was when they endured an inquest in September 2015 into Natasha’s death, which was “horrendous and distressing”. They gave evidence as a family about what happened to Natasha “but were made to feel like we were on trial and the outcome of an open verdict was unsatisfactory”.

The facts which the family maintained were correct were disputed at the inquest by the HSE but have since been admitted, he said.

“While today’s apology brings some closure, and will allow us finally grieve for Natasha, the pain, heartbreak and distress will never go away. Natasha is gone forever.”

Mr Perie also thanked the family’s legal team, including Ms O’Connor and solicitor Mairead O’Quigley, as well as family and friends for their support.