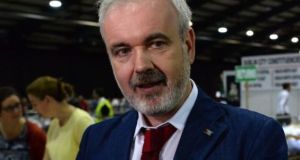 Amnesty International Ireland has welcomed the High Court’s quashing of a demand by the Standards in Public Office (Sipo) Commission that it return a € 137,000 donation from a foundation funded by financier and philanthropist George Soros.

In the settlement announced at the High Court on Tuesday, Sipo accepted the process leading to the decision it made in November 2017 to order the return of the funds was “procedurally flawed”.

High Court Judge Mr Justice Séamus Noonan was told the case was resolved following discussions between the parties and Maurice Collins SC, for the commission, read an extract in court from a letter by Sipo to Amnesty acknowledging its decision was procedurally flawed.

Sipo in its response repeated the call made in its annual report last week for an electoral commission and legislation to deal with political campaigns financed from outside the State.

The Department of Local Government said in a statement that “plans to establish an electoral commission are now being advanced” and proposals are expected to be brought to Government in the autumn.

Last November Sipo ordered Amnesty to return a donation made in August 2015 by the Open Society Foundations (OSF), a body founded by Mr Soros for Amnesty’s international “My Body, My Rights” campaign.

Sipo told Amnesty to return the monies after finding the donation was prohibited under Section 23 A2 of the 1997 Electoral Act after deeming it to be a donation for political purposes.

Acceptance of donations from abroad is prohibited under the Act unless it is from an Irish citizen. The €137,000 in funding was the biggest declared foreign donation.

Amnesty International said it was not used for its campaign for repeal of the Eighth Amendment on abortion.

No referendum on the Eighth Amendment was planned or had been called when the donation was made it was claimed.

In its High Court proceedings, Amnesty said Sipo’s decision was flawed and should be set aside.

In the letter read in court by Mr Collins, Sipo said: “Following careful consideration of the complaints made by your client, the Commission has concluded that the process leading to the adoption of the decision communicated in a letter of 17 November 2017 was procedurally flawed” and “ considers it appropriate” to consent to the order quashing the decision.

As part of the settlement, counsel read extracts from a letter from Sipo to Amnesty stating that “the Commission (Sipo) had concluded that the process leading to the adoption of the decision communicated in its decision in November 2017 was procedurally flawed” and “considers it appropriate” to consent to the order quashing the decision.

The letter also addressed a press release issued by Sipo in December 2017, which Amnesty had raised in its action.

The letter stated: “Arising from third-party complaints the Commission made inquiries with Amnesty relating to the OSF grant. Sipo acknowledges that Amnesty cooperated fully with the Commission and responded to these inquiries.

“The Commission confirms that at no point did the OSF(Open Society Foundation) advise the Commission that the donation was for political purposes within the meaning of the Electoral Act 1997.”

Michael Binchy, counsel for the State said the settlement was between Sipo and Amnesty International and the State was not seeking costs against any party.

He said: “Our primary concern has always been and remains with the law.

“The vague wording and overly broad application of the Electoral Act, which imposes restrictions and onerous reporting obligations on ‘third parties’ who accept donations over € 100 for ‘political purposes’.

“It imposes a blanket ban on overseas donations and very severe limits on domestic donations. “We believe this law contravenes Ireland’s obligations under international human rights law, including the rights to freedom of association and expression.”