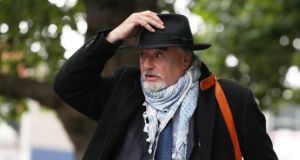 The High Court has ruled that Ian Bailey cannot be extradited to France to serve a 25-year prison sentence imposed on him by a French court for the murder of Sophie Toscan du Plantier in West Cork 24 years ago.

Mr Justice Paul Burns delivered his judgement on Monday rejecting the State’s application for the extradition of Mr Bailey, ruling that his surrender remains precluded under Section 44 of the European Arrest Warrant Act 2003.

The judge also found that surrender of the Englishman was prevented because of an “accrued or vested right” on the part of Mr Bailey “to the benefit of the previous judicial determinations refusing such surrender”.

Speaking outside the Criminal Courts of Justice following the judgment, Mr Bailey’s solicitor, Frank Buttimer said his client was “extremely relieved” by the decision and the impact on his life over the past 24 years had been “extremely challenging”.

Mr Bailey (63) was arrested at the Criminal Courts of Justice Building in December 2019, on foot of a European Arrest Warrant (EAW) issued by French authorities.

This was the third attempt by French authorities to seek Mr Bailey’s surrender in relation to the death of Ms du Plantier, whose badly beaten body was found outside her holiday home in Schull in December 1996.

French authorities previously sought the surrender of Mr Bailey in 2010. The High Court ordered his extradition but this ruling was overturned by the Supreme Court in 2012, which held that section 44 of the European Arrest Warrant Act 2003 prohibited surrender because the alleged offence was committed outside French territory and Irish law did not allow prosecution for the same offence when committed outside its territory by a non-Irish citizen. Mr Bailey is a British citizen.

A second French extradition request in respect of Mr Bailey was dismissed as an “abuse of process” by the High Court in July 2017. On that occasion, Mr Justice Tony Hunt held that the “unique features” of the case justified “termination” of the proceedings. He said the Minister was “estopped” or halted from obtaining an order for Mr Bailey’s surrender in light of the Supreme Court’s judgement in 2012 on identical relevant facts.

The former journalist, with an address at The Prairie, Liscaha, Schull, west Cork, was convicted of the French woman’s murder in his absence in a Paris court in May 2019. The three-judge Cour d’Assises (criminal trial court) in Paris accordingly imposed a 25-year prison sentence on Mr Bailey in his absence. Mr Bailey, who denies any involvement in Ms du Plantier’s death, did not attend the French court and had no legal representation in the proceedings, which he has described as a “farce”.

The Englishman had contested his surrender during a three-day extradition hearing at the High Court last July, with his lawyers submitting that a request to extradite their client to France for a third time was “an abuse of process”.

Opposing an application for Mr Bailey’s surrender to France, Ronan Munro SC argued that Mr Bailey had an “ironclad and unassailed right” not to be surrendered to France, which had not been threatened in any way by subsequent developments in law.

The lawyer said there was a binding judgment from the Supreme Court in 2012 prohibiting the surrender of Mr Bailey based on section 44 of the European Arrest Warrant Act 2003, which remained untouched and intact. Furthermore, the Criminal Law (Extraterritorial Jurisdiction) Act 2019 had not materially affected the decision of the Supreme Court in 2012 and therefore the High Court was bound by that.

The law has changed since the High Court decision in 2017, allowing someone who is an Irish citizen or ordinarily resident in Ireland to be prosecuted here for an offence committed outside Ireland.

Mr Bailey’s legal team had also objected to the Englishman’s surrender based on the absence of an appeal by the State from the High Court’s decision not to extradite the respondent to France in 2017, which they said created “an issue of estoppel” [a legal principle that prevents someone from arguing something or asserting a right that contradicts what they previously said or agreed to by law].

David Conlan Smyth SC, also for Mr Bailey, invited the court to find that there had been “inordinate, excessive and culpable delay” on the part of the issuing State to put the former journalist on trial, which he said remained unexplained. The barrister highlighted that it had been 24 years since the criminal investigation had commenced and seven years since the application was refused by the Supreme Court. “At what point does the EAW become so oppressive and burdensome that there is a breach of Article 6 fair trial rights. We say that date has long since passed,” he argued.

In reply, counsel for the Minister for Justice Robert Barron SC, said that “in a bizarre way” Ireland had become a “safe haven” for Mr Bailey because he could not travel anywhere outside the European Union for risk of being arrested. He said Ms du Plantier’s family felt they had not achieved justice and the High Court had a “prima facie” obligation to surrender the Englishman, who has been suspected for 24 years of killing the mother-of-one, to France.

The Irish High Court did not know what evidence would be available to the French authorities in the case of a retrial for Mr Bailey in France and what issues would likely arise, submitted Mr Barron.

At the outset of his judgement returned on Monday afternoon, Mr Justice Burns said that he would simply deliver the “lengthy” judgment and not make any formal orders. He adjourned making a formal order for two weeks to allow the State to seek leave to appeal the matter.

In the 63-page written judgement, Mr Justice Burns emphasised that the guilt or innocence of Mr Bailey in respect of the murder of Ms Toscan du Plantier was not an issue in the proceedings and instead the High Court was solely concerned with whether the applicant was entitled to an order for the surrender of the respondent to France on foot of the EAW before the court.

Regarding section 44 of the EAW Act 2003, the judge noted that Irish law had now been amended so that Ireland now exercised extraterritorial jurisdiction in respect of murder not only where the alleged offender is an Irish citizen, but also where the alleged offender is ordinarily resident within the State. Mr Bailey is, and was at all material times, ordinarily resident within the State, and therefore Ireland could exercise an extraterritorial jurisdiction over him as regards a murder committed outside of Ireland, he said.

“However, that amendment has not brought about a reciprocal basis as between France and Ireland in respect of the exercise of extraterritorial jurisdiction for the offence of murder in this case,” said the judge. He further pointed out that the French basis for extraterritoriality in this case remains the nationality of the victim, whereas the Irish basis for any such extraterritoriality is the nationality or ordinary residence of the alleged perpetrator. “That being the case the surrender of the respondent remains precluded by virtue of section 44 of the Act of 2003,” he said.

Mr Justice Burns said the amended statutory provision indicated no intention to deprive persons to whom a benefit or right has accrued through an earlier judicial determination. “In the absence of any such intention the respondent is entitled to retain the benefit or the right not to be surrendered to France as determined by the Supreme Court in Bailey No 1 and the High Court in Bailey No 2,” said the judge.

Mr Bailey was present in court for the hour-long hearing and used a scarf to cover his mouth.

The matter was listed for October 27th next. Mr Bailey was remanded on continuing bail until then but the judge said his attendance was not necessary on that date.

Conlan Smyth, for Mr Bailey, said his client intended to apply for costs on October 27th.

In a statement following the judgment, Mr Bailey’s solicitor, Frank Buttimer said: “Mr Bailey is extremely relieved at the decision that has been made today. The impact on his life of the entire situation has been extremely challenging for him for the past 24 years. He always expresses his sadness and his sympathy for the late Madame Toscan du Plantier, whilst at the same time always maintaining his innocence in relation to anything or any connection to that dreadful crime ... The matter is not of course finalised because the judgement has to be formalised and the State then have to take a position as to whether they will proceed further. That is entirely a matter for the State and other than that Mr Bailey intends to return to west Cork to attempt to get on with the rest of his life as best he can subject to any other decision that is made by the State in relation to any appeal entitled.”