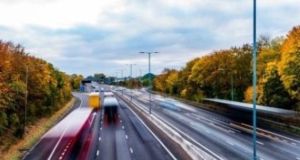 The High Court has dismissed a challenge to An Bord Pleanála’s approval for the 14km M28 motorway between Cork and Ringaskiddy.

The High Court has dismissed a challenge to An Bord Pleanála’s approval for the 14km M28 motorway between Cork and Ringaskiddy.

The proposed road development, being carried out by Cork County Council on behalf of the National Roads Authority, comprises some 14km of standard dual divided motorway, 1.6km of single carriageways and a service area 1.8 hectares in size.

In a judgment on Friday, Mr Justice Michael MacGrath said, despite skillful arguments by the group’s barrister Oisin Collins, he was not convinced the project was not properly assessed by the board before it made its decision.

The group had failed to discharge the onus of proof required for the reliefs sought and the case must be dismissed, he ruled.

The group had claimed the board’s decision was flawed on grounds including the application for permission to construct the road was premature, incomplete and did not meet requirements of domestic and European Law.

It also argued the board had failed to consider the whole project or the cumulative effects of the proposed development.

It claimed material to be used as part of the construction of the new road is to be extracted from a disused quarry located along the route, Raffeen Quarry, which is important ecologically and home to protected flora and fauna. No proper assessment of the proposed roadworks on the quarry has been carried out, it was alleged.

In opposing the action, the board said the project had been properly assessed before planning permission was granted. The potential cumulative effect of the road development and the quarrying had been addressed in an Environmental Impact Statement (EIS) and the board’s own assessment of the site, it said.

The impacts of quarrying during construction, and issues concerning flora, fauna and the ecology within the quarry, were also addressed, it submitted. The council, a notice party to the action, submitted an appropriate assessment in respect of the proposed project had been carried out. It also argued some of the points raised by the group in its proceedings were previously raised at an oral hearing in respect of the proposed scheme.

The board, the council argued, had adequate information before it to justify its decision in regard to the impact of the proposed road project on the environment.

In dismissing the action, the judge said the EIS was conducted in accordance with the requirements of the relevant EU directive and the board was not in breach of any of its obligations under that directive.

The group had not established the project was not properly assessed or that the combined effects of the road and quarry were not adequately addressed and assessed by the planning authority, he held.

Covid-19: Vaccination of vulnerable under-60s to resume 17:25
Bank of Ireland wins appeal over quashing of possession order for woman’s home 17:23
Data watchdog writes to Sinn Féin over collection of Facebook users’ information 17:06
Substantial reduction in farming needed to hit emission targets – Teagasc 17:02
Investigations to be launched into death of man (71) in workplace-related incident 17:02