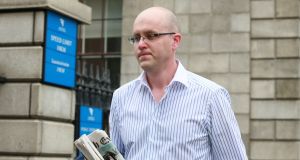 A child, who had to be delivered early and whose mother died from breast cancer eight days later, has settled her High Court action for €900,000.

Gracie Hamilton, her counsel Eugene Gleeson SC said, was “plucked from her mother’s womb” at 28 weeks and five days gestation as her mother had Stage 4 breast cancer. Her mother Melissa Hamilton was aged just 34 when she died on September 8th 2011, eight days after the birth of Gracie, her third daughter.

The High Court previously heard the young mother died of breast cancer after two missed opportunities to diagnose the disease.

Five years ago, Gracie’s father, Seamus Hamilton and his two other daughters Jessica (15) and Darcey ( 11) settled their High Court actions for €1.35m over Mrs Hamilton’s death .

On that occasion, Letterkenny General Hospital in Co Donegal “apologised unreservedly” that Mrs Hamilton’s cancer was not diagnosed and treated at an earlier stage.

In a letter to her husband, the general manager of Letterkenny General expressed “deepest and sincere regrets” on the devastating loss of Melissa.

“I realise no words can make up for the loss that you and your children have experienced and our thoughts are with you all in these difficult times,” the letter said.

Mr Hamilton had told the court that, when his wife died just a fortnight after her breast cancer was finally diagnosed, it felt like a different world.

On Tuesday, Mr Gleeson, for Gracie, said she had congenital sensory neural deafness and had to have a nine hour operation to have an implant inserted in her ear. Gracie is doing very well at school but will be limited in what job she will be able to take up, he said.

Mr Hamilton told the court it has been a long battle for the family but Gracie is “ a fighter”. He said the settlement would not bring back his wife but he was satisfied with the outcome. “We are overcoming the hurdles,” he told the judge.

The HSE it was claimed was responsible for the control, management and operation of the Breast Centre North West triple assessment clinic in Letterkenny General Hospital and had a duty to take all reasonable steps to safeguard Mrs Hamilton’s life and a duty to those close to her including Gracie.

It is claimed there was a failure to diagnose Mrs Hamilton’s cancer at an earlier treatable stage and negligent delay in achieving a cancer diagnosis.

Liability was admitted in the case. Approving the settlement Mr Justice Kevin Cross said he was delighted to hear Gracie is doing so well.