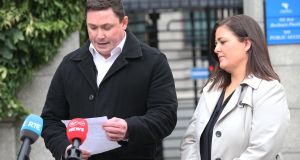 Deborah and Kevin Slevin pictured after the High Court approved an interim settlement of in the case of their daughter Rosie Slevin. Photograph: Collins Courts

A four-year-old girl with cerebral palsy who sued over the circumstances of her birth at the Coombe Hospital, Dublin, has settled her High Court action with a €3.3million interim payment.

The hospital expressed “sincere apologies” for “the failings in relation to the care provided” to Rosie Slevin and her mother.

“We accept that these should not have happened,” the Master of the Coombe, Prof Michael O’Connell, added, in a letter.

Prof O’Connell said he would like to acknowledge the many challenges the Slevins had faced as a result of the treatment afforded to Rosie and how traumatic this had been for them.

“I am truly sorry for the distress that this has caused to you and Rosie,” he concluded.

Rosie’s father, Kevin Slevin told the court: “My little girl is beautiful. She lights up every room.”.

A settlement was reached in the case after mediation. The interim settlement will cover Rosie’s needs for the next five years when the court will assess her future care needs.

From Glenealy Road, Crumlin, Dublin, the child, through her mother Deborah Slevin, sued the Coombe Hospital over the circumstances of her birth on August 20th 2016.

It was claimed there was failure to identify and act on abnormal and pathological CTG traces which monitor the foetal heartbeat and a failure to deliver the baby in a timely fashion.

It was claimed an earlier and timely delivery would have meant the baby was not exposed at all, or far as long, to hypoxic stress in the presence of severe anaemia.

Earlier delivery, it was claimed, would have avoided a brain injury on the balance of probabilities

It was further claimed there was failure to identify and analyse the ongoing absence of accelerations in the foetal heart rate.

It was also alleged there was failure to have immediate regard to the lack of foetal movement on the morning of August 20th, 2016 and to realise the baby was in distress and required an emergency delivery.

Rosie, it was claimed, suffered a devastating hypoxic ischemic insult prior to her birth, was in poor condition at birth, and had lost two thirds of her circulating blood volume.

Approving the settlement, Mr Justice Cross said Rosie was non-verbal but “more importantly”, she is a wonderful little girl. It was a good settlement which would provide for Rosie.

The Slevins’ solicitor, Roger Murray, said the family welcomed the early admission of liability. The letter of apology takes away some of the hurt “but will never undo the injury suffered by Rosie”, he said.