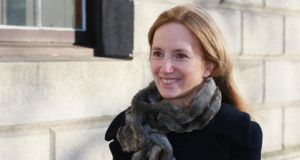 Journalist Gemma O’Doherty has settled her High Court defamation action against her former employers Independent Newspapers on terms including an apology and damages.

Independent Newspapers unreservedly apologised at the High Court to Ms O’Doherty for any stress and hardship caused to her. The settlement also includes undisclosed damages to the journalist.

Ms O’Doherty had brought defamation proceedings against Independent Newspapers (Ireland) Ltd and Stephen Rae, Editor in Chief of the Irish Independent, Sunday Independent and Herald newspapers, as a result of her treatment, and subsequent departure from the newspaper, following an investigation she carried out into the penalty points controversy.

The President of the High Court, Mr Justice Nicholas Kearns, was told by Martin Hayden SC, for Ms O’Doherty, the action had been resolved and could be struck out.

On behalf of the defendants a statement was read to the court by their counsel Ray Ryan Bl.

“Independent Newspapers wish to acknowledge the exceptional work of multi award-winning investigative journalist Gemma O’Doherty for the Irish Independent during the course of a lengthy career,” it stated.

The court heard the other details of the settlement are confidential.

The journalist brought proceedings after she was made redundant from the newspaper in 2013. Shortly before Christmas, she settled her unfair dismissal case against her former employers.

Speaking outside court, the journalist, from Shankill in Dublin, said: “This apology by Independent Newspapers before the High Court today is another comprehensive vindication of my reputation as an investigative reporter.

“On a separate and general note, journalists have an obligation to hold power to account, whether that be in An Garda Síochána, Dáil Éireann the HSE or other institutions of the State. We must be allowed to do our work without fear or favour, defending the public interest and the rights of citizens, especially victims of injustice and the marginalised, ” she added.

Her solicitor, Paul Tweed of Johnsons Solicitors, said the formal apology from Independent Newspapers “not only brings Ms O’Doherty’s defamation proceedings to a conclusion, it also completes the vindication of her professional reputation.”