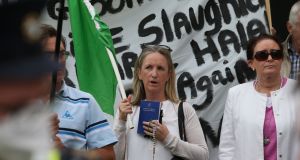 Political activist Gemma O’Doherty has denied claims she tried to evade service of defamation proceedings brought against her by Jimmy Guerin, the brother of murdered journalist Veronica Guerin.

On Tuesday Ms O’Doherty told Mr Justice Richard Humphreys that defamation proceedings against her are vexatious and an “outrageous attempt” to silence her from revealing corruption, which she said “will not happen.”

She also told the court that the publication of her purported home address in media reports of court proceedings where it was alleged she was trying to evade service had endangered her privacy and her safety.

Representing herself Ms O’Doherty, said is a “well respected” and “a multi award-winning journalist” with over “two million followers”.

However, she said has “received death threats” and “assaulted” due to her work as an investigative reporter, and expressed her concern that ‘Antifa’ may try to harm her.

She also said that she had to take extra security precautions at the address, which cannot be published due to an order of the court.

In his action Mr Guerin, who is an independent councillor on Fingal County Council, claims he was defamed in comments allegedly posted by Ms O’Doherty about him on her Facebook and Twitter accounts in July 2019.

He seeks damages, including aggravated and punitive damages, as well as injunctions permanently prohibiting the continued publication of the comments at the centre of the action.

The Howth-based councillor further seeks an order restraining Ms O’Doherty from publishing similar statements about him in the future.

Last week, following an ex-parte application, Mr Guerin’s lawyers secured various orders against Ms O’Doherty, including one deeming that she has been formally served with the summons outlining the action against her.

In their application Mr Guerin’s lawyers claimed Ms O’Doherty had been “actively trying to evade service,” of the proceedings she said were brought against her in order to stop her speaking out about Garda involvement in the murder of Veronica Guerin and the protection of alleged paedophiles by the gardai.

On Tuesday, Ms O’Doherty said the claim she had tried to evade service, of documents she said she had already been served, was “utterly untrue.”

On an ex-parte basis, sought various orders varying the orders made last week. The orders she seeks include one directing the service of any documents on her to an alternative address in Dublin or by email.

She sought orders preventing media publication of her purported home address. She also said she intends to have Mr Guerin’s action against her struck out.

During her submissions, Ms O’Doherty was critical of the media reporting of last week’s application, which she said was “derogatory, defamatory and vicious”.

She was further critical of both Mr Guerin and his legal team, and made allegations that the court had been misled and that perjury had been committed, and a complaint has been made to the gardaí.

Mr Justice Humphreys said he was prepared to make orders preventing the media publishing her home address. However, he was not prepared to grant her any further orders in the absence of other side, and adjourned the matter to Wednesday’s sitting of the court.

Ms O’Doherty objected to the matter being adjourned. She said the order she sought should be granted as the other side had obtained orders against her when she was not in court.

In reply, the judge said the matter would have to be heard in the presence of both sides. While Ms O’Doherty might not like it, “that is how the law works”, he said.