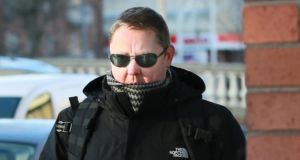 A retired Garda Sergeant, who was left with life-long post-traumatic stress disorder following the fatal shoot-out at Derrada Wood during the rescue of Don Tidey more than 30 years ago, has been awarded almost €170,000 compensation in the High Court.

Mr Justice Bernard Barton said Thomas Mansfield had been extremely affected after he was used with other unarmed garda recruits in the rescue from IRA kidnappers of the businessman at Ballinamore, Co Leitrim, in 1983.

Mr Mansfield, formerly of Rathcoole, Co Dublin, had told a Garda Compensation hearing that another recruit, Garda Gary Sheehan, and a member of the defence forces, Private Patrick Kelly, had been shot dead during the IRA gun attack.

Richard Kean SC said Mr Mansfield had been a recruit with An Garda Síochána less than three months when he had been sent with others to search for Mr Tidey in Derrada Wood, Drumcronan, Ballinamore.

The court had heard the search had been going on for several days and, on the evening of December 16th, Mr Mansfield’s search party, which included members of the Gardaí and Army, was on its way back to the hotel in which they were staying when explosions were heard in the wood.

Judge Barton said in a reserved judgment that Mr Mansfield had been in a car with armed detectives and other recruits and they could hear gunfire and explosions. He had overheard a radio message “not to shoot at the blue Avenger car” as it was a special task force vehicle.

The judge said that as the armed detectives were about to leave him and two other recruits with a detective at the garda car, Mr Mansfield had asked to be given a firearm.

Mr Kean, who appeared with Francis McGagh for Mr Mansfield had said he had been trained during the time he served in the Air Corps – before joining the Gardaí­ at the age of 25 in 1983 – in how to use a firearm and, due to the emergency of the situation, the young recruit had been given a gun.

Mr Mansfield had told the court that a blue Avenger car then drove up in front of them and stopped. Two men got out of the front doors and ran past them. Another man had started shooting at them from the open boot of the blue Avenger.

He said he felt confused for a brief time as they had been told not to shoot at the blue Avenger car. He had then realised the men were terrorists and he dived for cover. The gunman had discharged a full magazine of bullets at them.

Mr Mansfield, who broke into tears as he recalled the events, said he had been confronted with a conflict “raging in his head” to either do something and risk getting killed or to protect himself.

Mr Mansfield, who sued the Minister for Finance, had told the court that he felt “frozen in time” and could not raise his hand or arm to shoot at the terrorists.

The court heard that, when the IRA men moved away, Mr Mansfield approached their car and recovered an FN rifle from the boot. He learned later that a garda recruit and a soldier in another search party had been killed in the shooting.

Mr Kean said Mr Mansfield’s personality changed after the event. It was not until 24 years later that he had understood the depth of his psychological injury which had given him no option but to take early retirement from An Garda Síochána in 2009.

Mr Kean told Judge Barton that Mr Mansfield had remained a Garda until then, and had been awarded a Scott Medal for bravery in 1990 after he rescued a man from a house fire.

Judge Barton said he accepted that other incidents, which happened during Mr Mansfield’s career, had aggravated his initial injury caused by the Derrada Wood events and contributed to 25 per cent of Mansfield’s PTSD symptoms.

The judge, accordingly reducing Mansfield’s initial award of more than €200,000 by 25 per cent, awarded Mansfield €169,518 compensation.