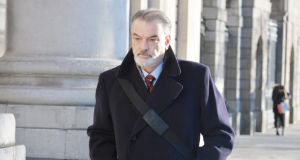 A Garda Detective Inspector has denied Ian Bailey’s partner Jules Thomas was arrested in bad faith so as to put pressure on Mr Bailey at the time of his first arrest in connection with the late 1996 murder of Sophie Toscan du Plantier in west Cork.

Michael Kelleher, now retired, said Ms Thomas was arrested on February 10th, 1997, under common law for the crime of murder, the same day Mr Bailey was arrested. His understanding was, when a person is arrested for murder, it does not mean they themselves have had to have committed murder, they could have aided and abetted it or being an accessory.

He said there was a reasonable suspicion Ms Thomas was “an accessory after the fact” and had told “lies” concerning Mr Bailey being at home on the morning of December 23rd, 1996, the day Ms Toscan du Plantier’s body was found.

He denied a suggestion by Tom Creed SC, for Mr Bailey, the only reason she was arrested was to put pressure on Mr Bailey and that was bad faith on the part of gardai. He agreed Ms Thomas had denied any knowledge of the murder aside from what she had heard was in the newspapers.

Mr Kelleher concluded his evidence yesterday, the 39th day of the action by Mr Bailey against the Garda Commissioner and State over the conduct of the investigation into the murder of Ms Toscan du Plantier whose body was found near her holiday home at Toormore, Schull, on the morning of December 23rd, 1996.

The defendants deny all the claims, including of wrongful arrest and conspiracy. The case adjourned just after 3pm yesterday after a juror became unwell.

Retired Asst Garda Commissioner Noel Smith began his evidence just before the case adjourned and said there was a “media frenzy” concerning the murder and he gave many interviews to journalists but did not initiate those contacts.

Earlier, Mr Kelleher said he was “disgusted” Mr Bailey had said, on seeing Mr Kelleher in court, he recognised him as the Garda who allegedly “shoved” his crotch towards Mr Bailey’s face during an interview in Bandon garda station on February 10th, 1997.

Mr Kelleher, who denies any such incident, said he attended Mr Bailey’s libel actions in 2003 and saw Mr Bailey several times when both were studying law in University College Cork and it was not correct the first time Mr Bailey set eyes on him since 1997 was in court this week. He had not introduced himself to Mr Bailey in UCC, he agreed.

Mr Kelleher said all statements made during the inquiry, not just Marie Farrell’s, were considered. He did not initially have concerns about Ms Farrell’s credibility in terms of what she had said about various sightings of a man between December 21st and 23rd, 1996, but understood she had lied about some matters because she was “in a compromised position”.

He denied there was pressure, following Mr Bailey’s arrest, to get a statement from Ms Farrell. There was a “desire” for a statement but he was unaware of any pressure.

The jury also heard the “jobs book” relating to tasks allocated during the murder investigation is with the GSOC (Garda Síochána Ombudsman Commission) but relevant material from it could be provided.