Fisherman in ‘acute pain’ after alleged Mayo assault by garda 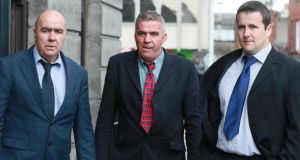 A dentist has told the High Court a fisherman attended him with acute pain days after being allegedly assaulted by a garda during a protest near the Shell gas refinery in Co Mayo.

Dentist Anthony Sweeney said Patrick O’Donnell told him he had received blows to the face when he attended for treatment on January 26th, 2007. He treated Mr O’Donnell with painkillers and antibiotics and later had to extract a tooth and repair a damaged bridge.

The damage was consistent with a blow and the upper and lower teeth colliding suddenly, he said.

Mr O’Donnell had told him he had been in pain for a few days and it was “obvious” he was.

The treatment involved several appointments and cost €2,100 in total, he said. Mr Sweeney was giving evidence in the continuing hearing of the actions by Patrick O’Donnell and his brother Martin, both fishermen with addresses at Porturlin, Shore, Ballina;  and Patrick Coyle, a farmer, Barnatra, Ballina.

They have sued the Garda Commissioner and State for damages over alleged assaults on them by gardaí during a protest near the Shell gas refinery at Bellanaboy Bridge on January 19th, 2007.

All three cases are being heard together before Mr Justice Paul McDermot.

Earlier, under cross-examination by Colm Smyth SC, for the defence, Patrick O’Donnell disagreed there was “riotous behaviour” by some protesters. He said there was “a scuffle” and he did not see many protesters pushing against gardaí.

When counsel suggested gardaí had to deal with a “dangerous” situation, Mr O’Donnell said he would not put a garda’s life in danger.

He denied a suggestion any injuries suffered by him were a result of him having surged forward and interacting with Garda Marvin Lee. He also denied that he, his brother and Mr Coyle were involved in holding onto Garda Marvin Lee and dragging him into the protesters and to the parapet of the bridge.

“All I know is I was severely beaten,” he said. That is the truth. “

Martin O’Donnell said there was “a scuffle” on the protesters’ side of the road and he went towards it check on his brother. As he did so, he said two gardaí held his hands down and he was punched in the face and beaten in the eye by another garda. He was shocked, angry and upset, he said.