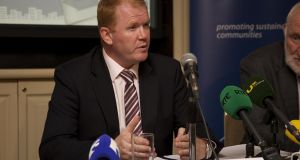 A Fine Gael senator claims he was defamed when likened to an 18th century highway robber in a report in a local newspaper which featured comments from a party colleague about boundary changes.

Paudie Coffey, a former TD and minister of state, is suing Iconic Newspapers, publisher of the Kilkenny People in the High Court over the article which appeared on January 15th, 2016.

The court heard he believes he lost his Dáil seat in 2016, by a margain of 300 votes, as a result of the article.

The article, headlined ‘Coffey the Robber’, reported that Fine Gael TD John Paul Phelan had launched a broadside on the then minister of state accusing him of trying to “rob” a chunk of south Kilkenny.

Mr Phelan said Mr Coffey and then minister for the environment Alan Kelly were “banding together to commit ‘daylight robbery’”.

“We’ve all heard of Crotty the robber — the 18th century highwayman who hid himself away in a cave in the foothills of the Comeragh Mountains,” Mr Phelan said. “He was the leader of a gang of bloodthirsty highwaymen.”

Mr Coffey, who lived in Portlaw in Waterford, claims those words were defamatory and meant, among other things, that he was guilty of misuse of public office and was a person of severe ill-repute, akin to an 18th century highwayman.

Richard Kean SC, for Mr Coffey, told the court that his client became depressed and isolated after he lost his Dáil seat and was subjected to comments such as ‘Coffey the robber’ at sporting events and other occasions.

He said it was extremely defamatory to call a man a robber who had not so much as been cautioned by gardaí and to do so was not parody or humour.

Mr Kean said Mr Coffey was never asked to respond to what Mr Phelan had said and that not getting the other side of the story was a breach of journalistic guidelines.

Counsel said Mr Coffey did not have any involvement in the boundary commission which made the changes criticised by Mr Phelan. His client had specifically made no submissions to the commission in case someone might suggest he was using his ministerial office to do so.

Mr Kean said his client sought a retraction and redress from the paper but this was not forthcoming. As a last resort he had to bring defamation proceedings to vindicate his good name. He claims the article was false, published maliciously and he is seeking damages.

The newspaper publisher denies the claims. It denies the article in its natural and ordinary meaning could be understood to mean what Mr Coffey says.

It pleads the natural and ordinary meaning of the article was, among other things, that a review of the Waterford/Kilkenny boundary was underway and that Mr Phelan publicly and politically disagreed with his party colleague in relation to it. It also meant Mr Phelan believed his chances of future electoral success would be adversely affected by the boundary change.

The paper says it will rely on the Civil Liability Act 1961, insofar as the individual wholly or partly responsible for publishing the allegedly defamatory words, is Mr Phelan, to who the defendant has no links or responsibilities.

The paper says the article was published in good faith as part of its lawful and legitimate reporting on matters of public concern.

The case continues before Mr Justice Bernard Barton and a jury.