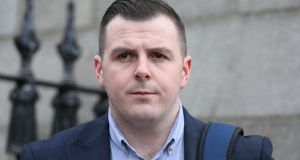 Brian Mohan, from Beaumont, Dublin pictured outside the Four Courts during the opening day of his High Court action. Photograph: Courts Collins

A Fianna Fáil activist has challenged the constitutionality of “crude” and “punitive” laws linking State funding of political parties to their achievement of gender quotas when selecting candidates for election.

Brian Mohan said he was told last year a “diktat” issued from Fianna Fáil headquarters stipulated the gender quota laws meant the party’s sole candidate in his Dublin central constutuency must be a woman.

There remains considerable opposition within his party to the gender quota laws and he believed only Fianna Fáil leader Michael Martin and former Fianna Fáil, now Independent, Senator Averil Power had spoken publicly in favour of them, he added.

His dispute concerning gender quota laws is with the State, not with Fianna Fáil, he said.

He was giving evidence on the opening day of his challenge to the constitutionality of provisions of the Electoral (Political Funding) Act 2012 which mean political parties will lose half of their central exchequer funding unless 30 per cent of their candidates in the next two general elections are female. Within seven years, 40 per cent of candidates should be female.

All of the parties have said they will meet the gender quota.

The case is against Ireland and the Attorney General who dispute the claims and argue Mr Mohan’s real dispute is with his party which had not complained about the legislation.

While women make up about 50 per cent of the Irish population, just 15 per cent of TDs are women, Mr Justice David Keane heard.

Opening the case, Mr Mohan’s counsel Michael McDowell SC said his client was told by his party last year gender quotas are a “fact of life” Fianna Fáil members must comply with whether they like it or not.

A directive was issued by party headquarters in September 2015 the Dublin central candidate must be a woman, the court heard. That came after it emerged in summer 2015 only ten of 47 candidates then selected by Fianna Fáil in 31 constituencies were women, leaving the party well short of the 30 per cent quota.

Mr Mohan, from Beaumont, Dublin, a 30-year-old student at Dublin City University pursuing a degree in Contemporary Culture and Society and part-time barman, is from a “staunch” Fianna Fáil family and has been a party member since aged 16.

He, Mary Fitzpatrick and Denise McMurrough sought nominations to run for Fianna Fáil in the three-seater Dublin Central constituency but Ms McMurrough withdrew at the October 2015 selection convention after protesting at the gender directive. Ms Fitzpatrick also criticised it in her speech accepting the nomination.

Mr McDowell said Fianna Fáil receives up to €1.2m of the total €5.4m annual exchequer fund for political parties and any failure to adhere to the gender quota laws meant it had to address the “very serious” prospect of seeing that funding halved.

This had to be seen in the context of restrictions concerning private funding of political parties and when Fianna Fáil in 2014 had received no publicly disclosable donations of more than €1,500, he added.

It was agreed there is a divergence between the gender makeup of the population and the number of women in the Oireachtas, counsel said. This case was not “a backdoor attack” on equality legislation but an argument the Oireachtas is not entitled to introduce a “crude and punitive” measure seeking to use public funds in the hope of ensuring more women candidates in general elections.

If there was such a general power, the State could also be entitled to tell parties they must meet age criteria or their candidates must include a certain number of people from various ethnic minorities, he argued. Under the Constitution, the people decide their rulers and the Oireachtas cannot intervene in decisions about who should contest elections, he said.

While Fianna Fáil had not opposed the gender quota legislation, no decision was ever made by the party to adopt gender quotas, he said.

The 2012 Act created a “new norm” establishing a goal within seven years of 40 per cent male and female candidates for parties. The provision to “arbitrarily” reduce State funding for parties unless they met those targets amended previous legislation allocating funding in accordance with the percentage of votes obtained.

This “huge reduction” in funding was a “crude, punitive” measure designed to say this is your so-called choice but make it at your own cost, he said. The “choice” was akin to that set out in Mario Puzo’s novel The Godfather and arose when there were very serious limitations on the rights of political parties to raise private funds, restrictions aimed at ensuring the wealthy should not be able to buy political parties so as to protect their interests.

Parties are obliged to publicly disclose donations exceeding fixed amounts and some €166,000 was the total figure for disclosed donations which exceeded €1,500 in 2014, he said.