Family’s case over death due to epilepsy drug error settled for €260,000 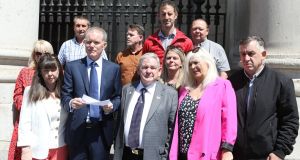 The Leech family and solicitor Mark Tiernan are pictured outside the Four Courts on Thursday after a High Court action. Photograph: Collins Courts. 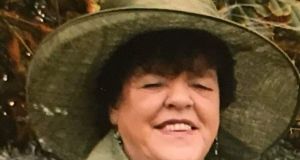 The family of a woman who died after a charting error resulted in her only getting half her normal dose of an epilepsy drug for 23 days has settled its High Court action over her death for more than €260,000.

Kathleen Leech (68), a mother-of-five from Courtown, Co Wexford, died on June 30th, 2012. This came after staff at Peamount Healthcare nursing home, in Newcastle, Co Dublin, failed to notice she had only been given her morning dose of Keppra, an anticonvulsant, to stabilise her epilepsy. She should also have received a second daily dose.

Peamount gave an unreserved apology for failings in care provided to her.

In a letter read out in court on Thursday, Peamount gave Mr Leech an unreserved apology for failings in the care of his wife and for the distress and upset it had caused the family.

Barney Quirke SC, for the family, told the court Mrs Leech suffered a stroke in November 2011 and never recovered enough to be discharged home from Tallaght Hospital, but a place was found for her in Peamount in June 2012.

She was on some 21 medications and unfortunately, on the day she arrived at the nursing home, the pharmacy was closing and there was a failure to record that she required two doses of Keppra. It was described correctly in one chart, but in the drug description chart the timing of the doses was wrongly described, counsel said.

As a result, Mrs Leech was 23 days without her second dose of the drug. She later suffered a serious seizure and was transferred back to Tallaght Hospital. but She developed an infection and died on June 30th, counsel said.

As a result of an investigation and an inquest a number of significant changes have been made by Peamount, including in relation to drug charts, to try to avoid such an error happening again, counsel said. The family were delighted that some good has come as a result, he said.

Counsel also said Mrs Leech was a big personality and the foundation stone and bedrock of the family. Her husband had suffered terribly as a result of her death.

The case was settled for €260,292 and all members of the family had agreed to waive their claim to the statutory €25,000 payment to the family over the death and it is to go to their father for him to deal with.

They had come to court not for compensation but to remember their mother and see what good can be done for the future, counsel said.

Approving the settlement, Mr Justice Anthony Barr said he was sorry for the tragic loss of Mrs Leech. He was glad the family had remained so strong and got some small consolation from the fact that practices would change so what happened will not happen to anyone else.

In a statement afterwards, family solicitor Mark Tiernan said it was seven years since they lost their mother not through an accident but through negligence.

“We finally achieved what we set out to do and that was to receive a public apology from Peamount Hospital,” he said.

“We know this will not bring our mam back but hopefully it will mean no other family will ever have to go through the suffering and loss we have endured.”