Ex-owner of island entitled to €700,000 over frustrated buy-back 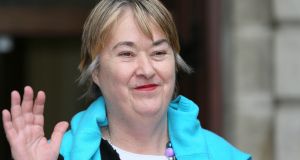 A former owner of an island off the Co Mayo coast is entitled to some €700,000 in damages after her bid to exercise an agreement to buy it back was frustrated, the High Court has ruled.

Mary Molloy brought proceedings over Bartragh Island in Killala Bay against singer and actor Sean Simon arising from a 1996 agreement between them which was not completed.

The island was later bought by a company controlled by international golfer Nick Faldo in 1997 with the intention of developing it into a championship links golf resort.

The High Court had in 2003 ruled Ms Molloy, a psychotherapist and psychologist, of Quay Road, Killala, Co Mayo was entitled to damages against Mr Simon, of Deerpark, Loughrea, Boyle, Co Roscommon, on the basis her bid to exercise the 1996 agreement had been frustrated.

Ms Molloy appealed aspects of that decision to the Supreme Court, but later withdrew the appeal.

In 2014, the High Court agreed to re-enter her application for assessment of damages.

Earlier this week, after Ms Justice Miriam O’Regan dismissed an application by Mr Simon’s lawyers to dismiss the case on grounds of delay, she proceeded to assess damages.

On Friday, the judge ruled, on foot of factors including evidence from valuers about the value of Bartragh Island at the relevant time, the value of the sale was €1.5 million.

After various deductions from that figure, including capital gains tax due when the island was sold to the Nick Faldo company, the judge ruled Ms Molloy was entitled to some €700,000 damages.

A smaller island off Bartragh is also to be transferred to Ms Molloy.

She had bought the island in 1989, intending to develop an institute for biodynamic therapy, but fell into arrears with her lender Irish Permanent, who put the property out to tender.

Deal did not proceed

While she had finance in place to buy back the island, the deal did not proceed.

John Hennessy SC, for Ms Molloy, said the “greatest tragedy” was that Ms Molloy “never wanted to dispose of the island”.

She has a long-standing connection with the island and this was a matter of “great emotion” for her, he said. She always intended to live on Bartragh and develop a business there.

Mr Simon, who took out a loan with Irish Nationwide Building Society to buy the island, had denied Ms Molloy’s option remained enforceable.

INBS took possession of the island because they were owed monies by Mr Simon, and agreed to sell the land for €1.5 million to Nick Faldo International in October 1997.