Denis O’Brien case: closing arguments to be heard next week 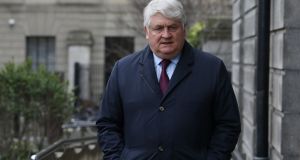 Businessman Denis O’Brien has claimed he was defamation in articles published in the ‘Sunday Business Post’ in 2015. Photograph: Collins

The jury hearing businessman Denis O’Brien’s action over alleged defamation in articles in the Sunday Business Post will return to the High Court next Tuesday to hear closing speeches.

When the eleven member jury returned to court on Friday morning, Mr Justice Bernard Barton sent them away until Tuesday.

He said that was necessary because the sides would be spending the day finalising the questions to be put before the jury.

The judge also told the jury they would hear closing addresses on behalf of both parties on Tuesday to be followed on Wednesday by the judge’s charge to them concerning the applicable law.

On completion of that charge, the jury will retire to consider their verdict.

Evidence in the case had concluded on Thursday, the eleventh day of the hearing.

The jury has heard evidence from three witnesses; Mr O’Brien, former Sunday Business Post (SBP) journalist Tom Lyons, and Ian Kehoe who was editor of the newspaper when the articles were published on March 15th, 2015.

Mr O’Brien claims he was defamed in articles published over six pages in the SBP.

The articles named Mr O’Brien as among the 22 biggest borrowers from Irish banks in 2008 and their focus was a PwC report about the exposure of Ireland’s banks in 2008.

That report was given to the government in November 2008 but not made public.

Mr Lyons got the report from a source in 2015 and shredded it shortly after the articles were published to protect the source.

Mr O’Brien claims the articles, written by Mr Lyons and others, wrongly meant he was among a “gang” of 22 borrowers who “wrecked the country” and that they defamed him and injured his reputation.

The defendant, Post Publications Ltd, denies the words mean what he alleges, denies defamation and malicious publication, and has pleaded “fair and reasonable publication on a matter of public interest”.